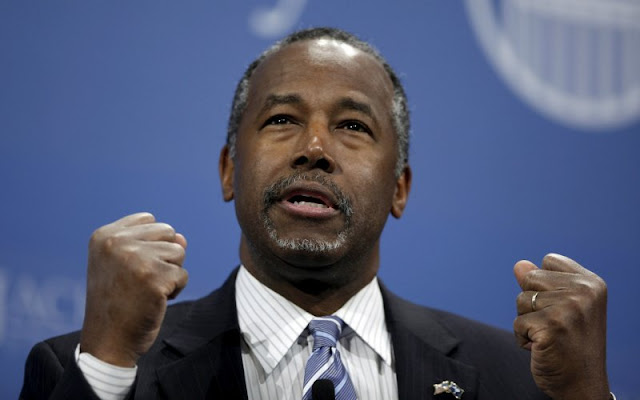 Ben Carson runs a campaign that is designed to enrich him instead of elect him. Badly, I might add:

Republican presidential candidate Ben Carson is reportedly cutting at least 50 staffers from his campaign. The neurosurgeon’s also downsizing the salaries of his top aides. Most of the employees being cut work in field operations or at his Northern Virginia headquarters. His travel entourage will now be made up of only a few advisers, and he'll likely be flying commercial instead of on private jets. Carson left Iowa during the caucuses to allegedly get some laundry done. He came in fourth place among GOP rivals.

There was that much fat in the Carson campaign? Who does he think he is? Jeb Bush?
The ultimate goal of the Carson for President campaign is to elevate Ben Carson to a position where he can command larger and larger speaking fees and market products to the suckers, I mean, marks, I mean, gullible sons of bitches who want to give him their money because he's a black man who hates liberals. This is the gig more recently held by Herman Cain and, before that, Alan Keyes.
Carson has to watch out because there's this woman named Stacey Dash who is trying to horn in on his scam. The people fired from the Carson scam machine are walking away with more money than they've had in ten years, no doubt, because who else would hire them? Do you think the Rubio campaign is going to soak up twenty or thirty Ben Carson castoffs and pay them three figure salaries?
I believe the answer to that is no.