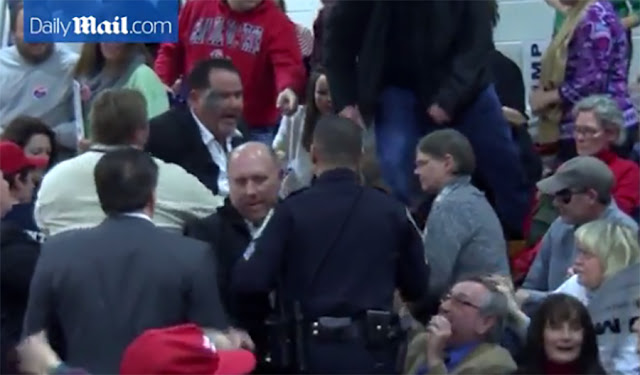 Did you know that there is a violent mob mentality at Donald Trump's political rallies?

During a Monday evening Donald Trump campaign rally in New Hampshire, a self-described "celebrity boxer" attacked a protester who shouted "fascist" at the presidential candidate. Todd "The Punisher" Poulton—who has previously gone in the ring against former baseball star Jose Canseco and celebrity dad Michael Lohan—can be seen on video pouncing on an unidentified male with long hair who disrupted the Republican front-runner's event. As seen in the photo above, Poulton sports a face tatto mimicking that of professional boxing legend Mike Tyson.

This is how discourse in modern America works. Are you against guns? People with guns will show up an intimidate you. Are you for a woman's right to do whatever she wants with her body? People will shoot up the Planned Parenthood clinic you just walked into. Are you on the fence about Whole Foods? Don't worry, they'll just charge you extra so you can make up your own mind.

The mob is in charge now. Got a problem with that? Someone nearby is really hoping you'll give them a chance to be a hero so don't fight back when they start trying to kick your ass. You'll ruin it for them if you don't give them a chance to catch their breath and continue pummeling you in the face. Definitely do not spin them around and give them a snuggie. That would just ruin their chance to get an attaboy from the man running for President.
on December 29, 2015