The Republican Party Doesn't Know How to Fight Terrorism 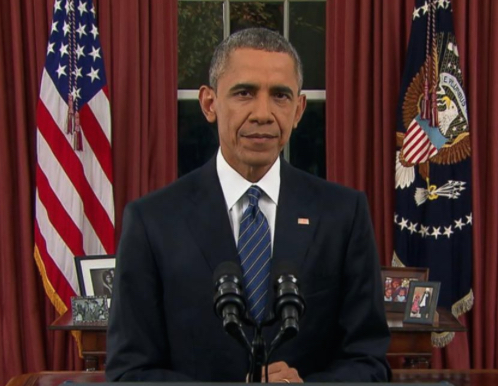 The president gave some brief remarks about terrorism tonight, and I think he missed a golden opportunity to tie the bigotry of Donald Trump to the opposition:

President Obama said terrorism is an "evolving threat" but that the U.S. will be able to overcome it, speaking to the nation in a primetime address Sunday.

"The threat from terrorism is real, we will overcome it," Obama said. "We will destroy ISIL and any other organization that tries to harm us."

Obama's speech comes after a young Muslim couple killed 14 people in San Bernardino, California. The shooting, which the FBI is investigating as a terrorist attack, could be the deadliest terrorist attack on American soil since September 11, 2001.

His message was pretty forthright. No one can protect us, but there's a terror-fighting infrastructure in place that is trying to eliminate the low-hanging fruit. I think the smart move would be to admit that bombing people is counter-productive, but that's just me.
Now, he is dealing with a new Speaker of the House and I have no doubt that Paul Ryan will do whatever he can to obstruct the president's agenda. But Donald Trump is the leading candidate for the Republican nomination for president next year:

Republican presidential front-runner Donald Trump says the country’s “tremendous problem” with radical Islamic terrorism will get solved once President Barack Obama “gets the hell out” of office.

Trump slammed the president Sunday for not using the term “radical Islamic terrorism” to describe the terror attacks in Paris and this past week’s mass shooting in San Bernardino, California, hitting on a frequent Republican criticism of the Obama administration’s language used to describe terrorism.

That's just crazy talk from a man who hasn't even bothered to read any of the paper-thin binders being handed to him by cut-rate advisors. If the president says "radical Islamic terrorism," then the next thing you know, they'll be moving those goalposts and coming up with another term. The opposition party doesn't get to dictate the verbiage of the president. But, is there anything racist or stupid coming out of Trump's mouth when he gets in front of a camera? Any outright xenophobic bigotry? Yes, plenty of that:

“Until he admits that this is a problem, we're never gonna solve the problem,” Trump said on CBS’ “Face the Nation. “But he's only gonna be there, fortunately, a little bit more than a year. Because the problem will get solved when he gets the hell out.”

Trump also said he supported the idea of profiling in order to stop terrorism, arguing that people are being too politically correct with Muslims in the country when they don’t respond to red flags.

“I think there can be profiling,” Trump said. “If they thought there was something wrong with that group and they saw what was happening, and they didn't want to call the police because they didn't want to be profiling, I think that's pretty bad. People are dead. A lot of people are dead right now. So everybody wants to be politically correct, and that's part of the problem that we have with our country.”

And he did not rule out the idea of tracking Muslims in America.

Trump’s call for a database for Muslims has been criticized, including from some of his Republican competitors in the presidential race, even as he’s risen in the presidential polls in the wake of the Paris attacks. But he argued on “Face the Nation” on Sunday that he wasn’t stoking the fears of Americans over terrorism.

Why not tie this to Trump and the party he purports to lead? Where's the downside in admitting that none of these people have anything reasonable to say? The Republicans have nothing but a bloody shirt to wave, and they have nothing but a minority on which to take out their frustrations. This is pure un-American bigotry at work, and it's selling a lot of tickets for them. It's driving their agenda. We should never let anyone forget that.
on December 06, 2015