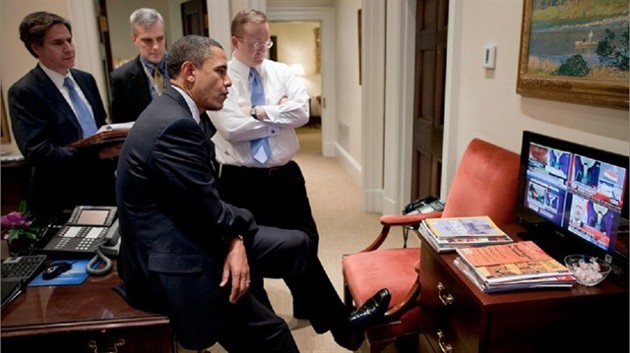 James Fallows could do a cover story on this for the Atlantic:

The larger strangeness was the miffed tone from much of the commentator class about the “no TV” admission. Who does this guy think he is? Talk about aloof! For the DC media culture, Obama’s comment carries an extra dose of status-offense, since “cable hits” are such an important part of modern journalistic branding and presence.

Fallows goes on to quote a reader who refuses to consume cable news in any way, shape or form because it's a push technology:

I never watch “cable news”. Never. Never. Never. That includes CNN, MSNBC and Fox. The whole idea of “cable news" is toxic in my mind. The first thing that I do when I get a new TV provider is to delete those channels from the list that I cycle thru when I do any channel surfing.

I also never watch most of the network news broadcasts and especially any of the Sunday morning chat shows. I do watch the PBS News Hour, but only after recording it so that I can delete any segments where they have 2 people from opposite sides of some debate contradict each other.

Judging by the ratings that those channels get, I don’t think that I’m alone. In my immediate circle of friends and family, I don’t know anyone who does watch that. Neither my own kids, nor my step children have “cable TV” connections. (That includes actual cables as well as satellite ones…)

“Cable news” is what we call in Silicon Valley a “push” technology. I only use “pull” technology to get my information. I have to do that to make up for the editorial control which disappeared from “cable news” long ago. You have railed about the false equivalency problem at length, but that is only one of many sins of the modern “cable news” world.

Would life be any worse off with a steady diet of "pulled" information? I don't think it would. Pulled information is what you go out and gather for yourself, making a point of looking at the sources and the context. In one way, that's incredibly inconvenient. But, in another context, how likely are you to be persuaded by someone biased who discounts the facts? Given how often cable news is wrong, how is shutting it out completely a bad thing?
And I would encourage you to read what Fallows has to say about how the President reacts to developments because, when you think about it, the last thing we would want a President to do is to make all of his decisions based on what a television pundit advocates.
Anyway, this is a fascinating way to gather information. And stop reading blogs! All blogs are terrible and full of garbage.
on December 28, 2015