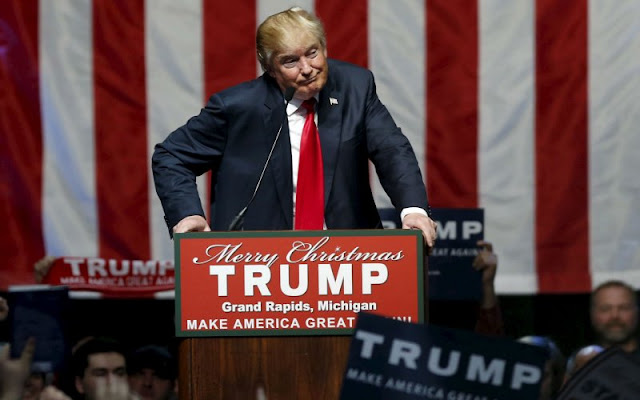 This is too good not to highlight in a lame blog post:

In the latest series of Trumpisms, the Republican presidential frontrunner on Monday knocked Hillary Clinton for not returning to the stage on time in Saturday night's Democratic debate and getting "schlonged" by Barack Obama in the 2008 presidential race. "Even a race to Obama, she was gonna beat Obama. I don't know who would be worse, I don't know, how could it be worse? But she was going to beat -- she was favored to win -- and she got schlonged, she lost, I mean she lost," Trump said. The real estate mogul also criticized Clinton for her late return to the stage because of a bathroom break, calling it "disgusting." Unprompted, Trump said, "I know where she went. It's disgusting. I don't want to talk about it, it's disgusting."

I'm just going to say it--a mainstream Republican candidate for the presidency invoked the racist image of the Mandingo. He spoke of an African-American man having sex with a white woman. God help us all, but that dog whistle was blown today like it hasn't been blown in a long, long time.

Now, we know several things. One, Trump will not pay any price whatsoever for his latest crude missive. Two, he's unscripted and out of control for what amounts to the eighth or ninth week in a row, depending on when the first outburst occurred. Three, the sexism embedded in his comments about Hillary Clinton is still absolutely shocking and without any real precedent.

This is not the sort of thing that a John McCain would have said and it's not the sort of thing Mitt Romney would have said. I mean, there's just no precedence for the crudity and the vulgarity of this man. We've gone from the Romneyshambles to the Donaldshambles. It's a shit show no one can stop watching.
Do you know what would work right now for the Republican Party? A Mitt Romney-John McCain ticket. They should drag both nominees out of mothballs, give them a billion dollars in someone else's funds, and remove all of the other candidates from the race. Make it Trump against Romney-McCain. Granted, it would turn to shit and catch fire like a bus full of exploding propane tanks and potato masher hand grenades, but it would still be more fun than what we have right now.
If you're conservative, you're quietly pleased with this Donald fellow. If you're liberal, you can't imagine how many more Salon posts it's going to take before everyone agrees with you that Donald can't survive this. I'm sorry, but the crude sexism just brings more voters to the table. I would be surprised if he doesn't end up breaking forty percent soon.
on December 22, 2015