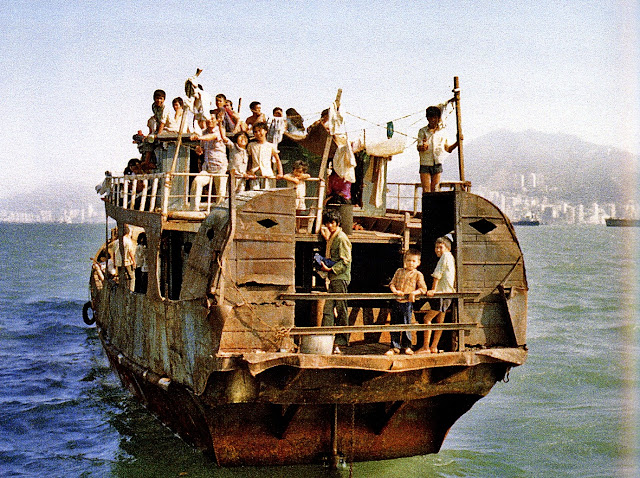 It's a sad day when you can't agree with the great Charles Pierce:

We can dismiss the concerns of the silly people first. We can dismiss Big Chicken's terror of Syrian toddlers. We can dismiss Tailgunner Ted Cruz's religious test for citizenship. (A philosophy with which Daesh would heartily agree.) We can dismiss Governors Greg Abbott of Texas, and Robert Bentley of Alabama, and Scott Walker of Wisconsin, and Phil Bryant of Mississippi, all of whom went quickly for the chest-pounding end of the xenophobic scale. And we can dismiss John Kasich of Ohio, because he's still running for president in a party that has lost its mind. But we cannot dismiss the legitimate security concerns, expressed with prudence, of people like Charlie Baker here in the Commonwealth (God save it!) or Maggie Hassan in New Hampshire. The idea that all the opposition to resettling here in the United States those fleeing the Syrian civil war is based simply on bigotry and fear is a kind of absolutism that doesn't serve the cause of the refugees any more than the bloviating of Tailgunner Ted does.

No, fuck that. Fuck that ambivalence and that wishy-washy bullshit in the ear and throw it down a flight of stairs. This is un-American and goes against every principle I can make up or imagine. I can dismiss their "legitimate" security concerns because there is a historical precedent that looms large over all of this. I'll stop before I call it racist but I really do think this is based on the idea that everyone from a Middle Eastern society is somehow genetically well-adjusted to being a terrorist in some way, shape or form. That insanity has to stop before I get my Irish up.

Have we forgotten the boat people? Have we forgotten the massive influx of Vietnamese refugees who came to this country in dilapidated boats after suffering through decades of war? Let's not forget that the Vietnamese were hardened a confusing mix of farmers, city dwellers, innocent bystanders, poorly trained government soldiers, and guerrilla fighters when we abandoned them to their fate. The very likelihood that some former Vietcong fighters could have, and did, in fact, emigrate to America is a forgone conclusion. These were people who had every right to hate us and who could have infiltrated this country.

Let's revisit that era, if you please:

Integrating refugees into American society meant the development of a comprehensive program of support and preparation. While a chief goal of resettlement was to help refugees achieve economic independence as quickly as possible, they benefited from generous government aid assuring a basic level of well-being until the refugees became self-sufficient. Many Vietnamese refugees started their American life at the bottom of the socioeconomic ladder, a fact reflected in their high rates of labor force non-participation, unemployment, poverty, and dependency on public assistance. In fact almost all of them began on welfare. The three cash assistance programs most commonly utilized by Vietnamese refugees were Aid to Families with Dependent Children (AFDC), Supplementary Security Income (SSI), and Refugee Cash Assistance (RCA). The first two programs were forms of public assistance, or welfare, available to U.S. citizens. AFDC was for low-income families with children and SSI was for the elderly or disabled poor. Refugees not eligible for either of these forms of assistance generally received RCA during their first six to eighteen months and were also able to apply for food stamps.

While early official policies toward Vietnamese refugees were generally sympathetic, the American public was ambivalent. As early as 1975 at the time of the initial entry of the Vietnamese, a Gallup Poll indicated that a majority of Americans then preferred that the Vietnamese be kept out of the United States (Kelly 1986). Many Americans felt that such culturally different people would create additional difficulties for acculturation, and some saw the Vietnamese as new economic competitors, as well as reminders of an unpleasant war. In the late 1970s, Americans at lower socioeconomic levels, those most likely to have to compete with the new arrivals for jobs, were found to show significantly higher levels of prejudice than individuals of higher socioeconomic status, against the Vietnamese (Cotter and Cotter 1979). The entry of Vietnamese people into the fishing industry of Gulf Coast in the late 1970s and early 1980s provoked resentment from native-born fishermen who felt threatened by the competition (Starr 1985). Prejudice against the Vietnamese resulted in some incidents of violence. In 1983, for example, a Vietnamese high school student in Davis, California was taunted by a group of white high school students and then stabbed to death. In 1989, in Raleigh, North Carolina, a Chinese American who was mistaken for a Vietnamese was beaten to death by men who were angry over the Vietnam War. In 1990, in Houston, a young Vietnamese American was stomped to death by skinheads. These were, of course, exceptional occurrences, but they could represent the most extreme manifestations of an incomplete acceptance of the Vietnamese by American popular opinion.

So, once again, fuck them. This is America. I can accept the ambivalence on the part of the people but I cannot excuse it on the part of elected officials who know that a white person with a strong opinion about keeping women from being able to choose what to do with their bodies is a helluva lot more of a threat than a kid with one shoe and a thousand yard stare from Aleppo.
If the very same people we bombed and napalmed into oblivion are willing to get on boats and come here and integrate into our society, then we have a moral obligation to accept the Syrian people displaced by our own stupidity. We went into Pottery Barn and knocked over the racks and danced in the aisles with our arms outstretched and we broke every damn thing we could get our hands on. We accepted Iraqis and Afghans and we have a moral obligation to accept Syrians as well.