They Did Store Grain in the Pyramids 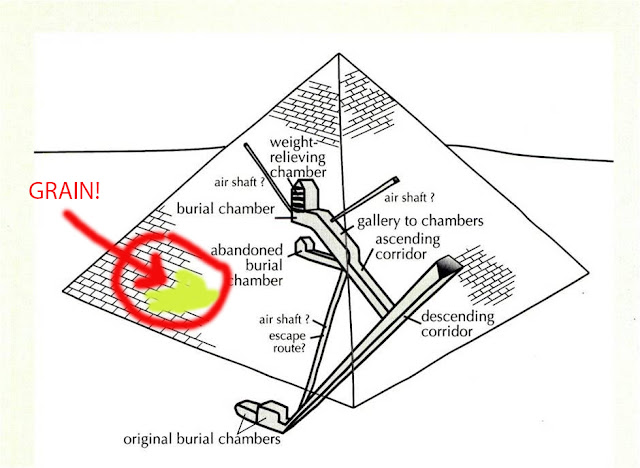 Ben Carson is out of his fucking mind, of course:

Ben Carson on Wednesday reaffirmed his belief that ancient pyramids in Egypt were used to store grain rather than for pharoah tombs. When asked if he still believed the pyramid theory he outlined in a 1998 commencement speech, Carson told CBS News, “It’s still my belief, yes.” BuzzFeed posted the speech Carson delievered at Andrews University, a college founded by Seventh-day Adventists. “My own personal theory is that Joseph built the pyramids to store grain,” he said. “Now all the archaeologists think that they were made for the pharaohs’ graves. But, you know, it would have to be something awfully big if you stop and think about it. And I don’t think it’d just disappear over the course of time to store that much grain.”

Talk about an unforced error. Someone in the Carson camp is going to search Google for an image showing grain storage in pyramids. Please, please, please--use the image above. I made it special just to help you out of your jam.
If you repeat it enough times, you can make any idiot believe that the pyramids were grain storage facilities. You can make a Republican primary voter believe anything you want as long as you say it in a calm, clear voice without laughing like a hyena on windowpane acid.
on November 05, 2015