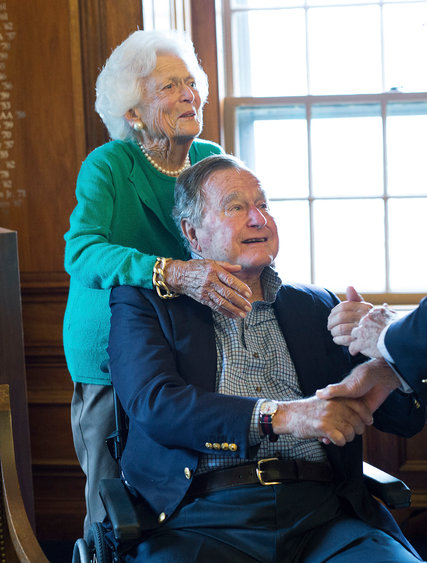 The hired help are to blame for the fact that the entire Bush dynasty is a rolling dumpster fire:

WASHINGTON — After years of holding back, former President George Bush has finally broken his public silence about some of the key figures in his son’s administration, issuing scathing critiques of Vice President Dick Cheney and Defense Secretary Donald H. Rumsfeld.
In interviews with his biographer, Mr. Bush said that Mr. Cheney had built “his own empire” and asserted too much “hard-line” influence withinGeorge W. Bush’s White House in pushing for the use of force around the world. Mr. Rumsfeld, the elder Mr. Bush said, was an “arrogant fellow” who could not see how others thought and “served the president badly.”
Mr. Bush’s sharp assessments, contained in a biography by Jon Meacham to be published by Random House next week, gave voice to sentiments that many long suspected he had harbored but kept private until now. While he continued to praise his son, he did tell Mr. Meacham that the younger Mr. Bush was responsible for empowering Mr. Cheney and Mr. Rumsfeld and was at times too bellicose in his language.

The world is divided into Bushes and the help, and the help are to be jettisoned when things go south. I don't get the timing of all of this--you'd think that Jeb Bush would want Dick Cheney out there campaigning for him because nothing else is working. His campaign is a disaster. Billionaires are going elsewhere with their money.
An old clown like Sheldon Adelson should have been feted by the Bush clan and they should have had Cheney grab the old man's arm and hiss things like "we're going back to the gold standard sideways!" and  "kibbutzes overrun by Hamas!" and "we bomb as soon as the raven appears."
Cheney's response will be to further emasculate these people. They should have waited until both he and Rumsfeld were medically unfit for public commentary or in the throes of dementia before attacking them. Oh, well. Tactics were never a strong suit for these aristocrats.
on November 05, 2015
Email ThisBlogThis!Share to TwitterShare to FacebookShare to Pinterest
Labels: Accountability, Bullshit, Commentary, History, News