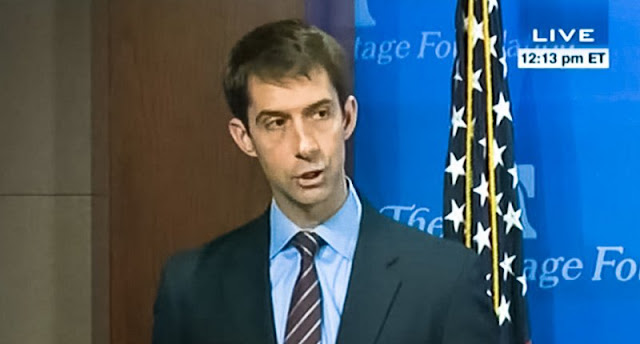 I mean, how can you argue with a brilliant mind like this:

Senator Tom Cotton (R-AR) suggested on Monday that population decline and drug abuse in poor areas could be the result of too many people on Social Security disability.

Speaking to the conservative Heritage Foundation on Monday, Cotton warned that communities with high a percentage of residents on Social Security disability had reached a tipping point that was linked to population decline. But he said that communities which used fewer benefits were enjoying a population increase.

“It’s hard to say what came first or caused the other, population decline or increased disability usage,” Cotton opined. “Or maybe economic stagnation caused both. Regardless, there seems to be at least at the county and regional level something like a disability tipping point.”

“When a county hits a certain level of disability usage, disability becomes a norm,” he continued. “It becomes an acceptable way of life and alternative source of income to a good paying full-time job as opposed to a last resort safety net program to deal with catastrophic injury and illness.”

I guess that's why affluent suburbs are being devastated by heroin addiction.

[...] the heroin epidemic of the 21st century is largely a white person’s scourge. The Center for Disease Control says the cheap, easily accessible drug is attracting affluent suburbanites and women. Nearly 90 percent of the people who tried heroin for the first time in the past decade are white, according to a study published in JAMA Psychiatry in July, 2014, and there is no reason to believe the trend has eased since then. Said the researchers: Heroin use has changed from an inner-city, minority-centered problem to one that has a more widespread geographical distribution, involving primarily white men and women in their late 20s living outside of large urban areas. The cause for this may be simple. White people addicted to prescription opiates, the sorts of drugs they could conveniently get from a friendly doctor or pharmacist, are finding heroin an obvious (and cheap) substitute now that law-enforcement officials have cracked down on those opiates. The hottest fronts in this war now can be seen in rural states like Vermont and in suburban areas that largely missed the ravages of the crack craze.

All of those recipients of tax breaks, property tax credits, and subsidized employment via government contracting are making everything go to hell because that money isn't going into some phony 401K scheme anymore--it's paying for heroin and then it's paying for drug treatment. It would seem to me that people who have a lot of money on their hands are more likely to get bored, abuse drugs, and vote Republican.
To be fair, Cotton is from Arkansas, and probably meant methamphetamines rather than heroin. That would mean that his bullshit, ignorant argument still makes no sense, but I don't think anyone is expecting much out of a junior wingnut senator.
on November 10, 2015