MSNBC is Worse Than Fox News 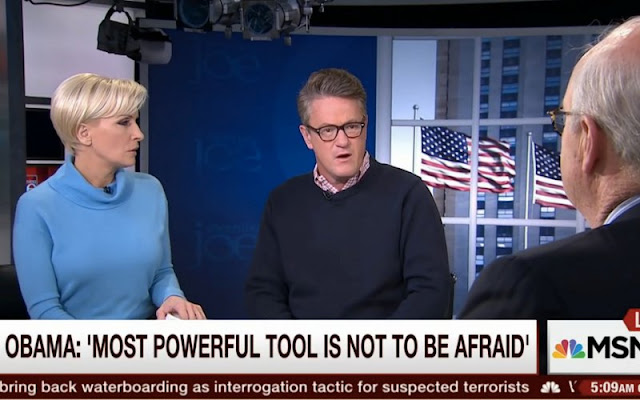 As long as Joe Scarborough has the ability to say things like this to the American people, you can have MSNBC:

“It’s staggering, I don't know where to begin,” the MSNBC host began his rant. “There's not an intel agency on the planet that doesn't fear—I will use the word fear—ISIS.” Referencing recent intelligence reports that show ISIS is pursuing chemical weapons, the host asked, without a hint of irony, “How much does that sound like 2002 and the leadup to the Iraq War?”

I don't think anyone really "fears" ISIS except that very small constituency within the American media that wants to denigrate the President. Intelligence agencies in Turkey and China don't seem to mind them a bit. ISIS represents no existential threat to anyone and is a loosely organized terrorist organization funded by money from Saudi Arabia and the other Arab gulf states and aligned with the Turkish government. We ought to fear Turkey more than anything else and we ought to expel Turkey from NATO because of their tacit support of ISIS. We should consider the fact that Turkey's proxy war with Syria and Iran is just as destabilizing as the Saudi plan to purchase stability at home by paying extremists to attack other entities.

Who's a friend and who's an enemy? Why can't we grow up and view the world as it really is?

We should demand that MSNBC get rid of Scarborough, but what good would that do? He represents the beliefs of corporate management. MSNBC is just as bad if not worse than Fox News. The difference being the lack of liberal blogs who point this out every day.
on November 24, 2015