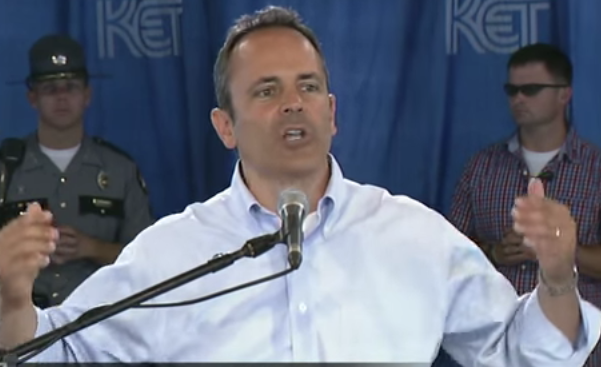 In American politics, there is no hope for people who vote against their economic self-interests:

Bevin, an ultraconservative businessman who launched an unsuccessful primary challenge to Senate GOP Leader Mitch McConnell in 2014, promised to roll back the commonwealth’s expansion of Medicaid under the Affordable Care Act and dismantle Kentucky’s popular health insurance exchange, Kynect. Under Democratic Gov. Steve Beshear, Kentucky was one of the few Southern states to embrace the 2010 health reform law. Conway pledged to continue Beshear’s health reform policies.

Polls of the race were few and far between, but generally gave Conway, the commonwealth’s attorney general, a slight edge. But with both candidates mired in the low 40s heading into Election Day, the outcome was difficult to predict.

Do you live in Kentucky? Do yourself a favor and leave if you can. Ask for relocation assistance if it's available. The stated goal of Matt Bevin is to destroy the economic infrastructure of an entire American state in order to satisfy his own ideological bent towards what can only be described as evil. Yes, it is evil to take something away from people that keeps them alive. You take away health care and the result is the expected one--people fucking die for lack of access to proper care.
This is what Federalism will look like for the next few decades. Damage and ruin for many, economic normalcy and progress for others. We'll have people living and thriving in one state and we'll have bankruptcy, death, and desperation on the other side of an otherwise insignificant border. The states have gone mad and elected extremists because of the fear of abortion/guns/federal bogeyman. I realize that this is immensely sad for the people who voted to keep their health care insurance and to keep this insane wingnut from destroying the economy of Kentucky.
But these states are now incubators for craziness and extremism. They are very, very friendly for corporate interests and for anyone opposed to common sense. No one cares enough to vote anymore and governance is now a fondly cherished memory. Another domino has fallen and no one is paying attention to the sound it makes when it lands on anyone unfortunate enough to be sick.
It does no good to sneer at the intentional harm being done to states like Kentucky. Nobody reads anymore, nobody knows nothing, and nobody votes. Cherish the fall of decency. Embrace the pawn shop economy of being lucky or being dead.
on November 04, 2015