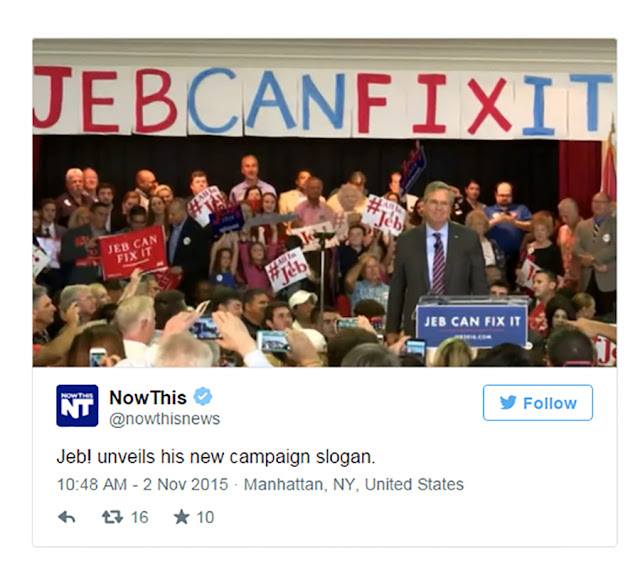 Gawker was quick to note that the slogan "Jeb Can Fix It" is remarkably similar to that of the Jimmy Savile show "Jim'll Fix It."

This is relevant because:

For unfamiliar Yanks, Savile was one of Great Britain’s most beloved and popular entertainers during his lifetime, covering the gamut from radio to television to charity work and everything in between. He was even knighted by the Queen in 1990. But after Savile died in 2011, what had long been sporadic and stifled allegations of sexual abuse began to blow up. And up and up and up.

By November of 2012, it was revealed that 450 alleged victims had come forward in the mere ten weeks since the police launched an investigation into Savile’s behavior. According to a BBC report from the time, of the hundreds of alleged victims, 82% were female and 80% were “children or young people.”
In 2014, a new report from the Health Secretary revealed that Savile also may have sexually abused patients at over 40 different hospitals he had visited under the auspice of “charity work.” With the Daily Mail writing that “Savile is thought to have abused patients aged from just five to 75.”

Nobody in America knows who Jimmy Savile was, and that's probably why the Bush campaign will continue to bleed money and look ridiculous to informed voters.
on November 02, 2015