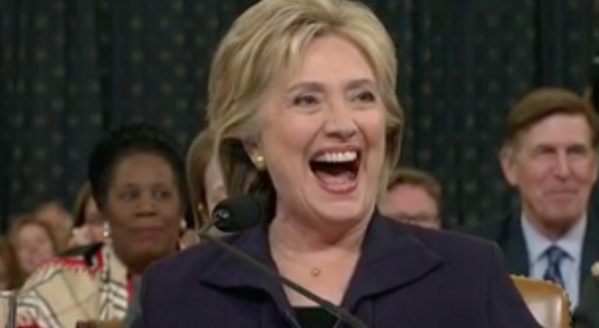 The GOP effort was less than sterling and Clinton remains the frontrunner for the White House – but that doesn’t mean she left Thursday completely unscathed.

Even before the Benghazi Day festivities on Capitol Hill starring Hillary Clinton began yesterday, the expectations for how the performance would play out were already in place. Clinton herself had requested an open, public hearing, one where the cameras would show Republicans aggressively hounding her on specifics regarding what she knew, when she knew it, and how important Sidney Blumenthal was to informing her of it.
Congressional hearings naturally tend to turn the witness into a sympathetic character, and this one was no different. The side for the defense serves up softballs that lead to long-winded statesmanlike answers, while the prosecution looks like a bunch of parsing, small people who are torn between grandstanding and focusing on minor details that seem unimportant in the grand scheme of things. The fact that House Republicans have many members more inclined to view opportunities to question a witness as an invitation to give another speech is never a good factor in such a scenario.

As it turned out, Republicans did slightly better than I expected given the well-known capability of Hillary Clinton to obfuscate at a Pro Bowl level. She danced around many of the Republican lines of questioning with her normal verve and ability to parse words to the nth degree. But Republicans largely resisted their worst tendencies, sticking to fact-checking, and dialing down most of the bluster. And they did catch her on a few things – not in a manner that changes anything about the conversation about Clinton, Benghazi, and her emails, but in ways that highlight Clinton’s questionable approach to the entire Libya situation and her role as Secretary of State.

This is Rich "Sparklepants" Lowry kind of deluded. Eleven hours and no punches landed? The whole thing lying in tatters you say? Was she really home alone? Good God, the D-list of Republican Congressional questioners today phoned it in and walked home with their shirts hanging out and their pockets turned out. They went home tonight with nothin'.
The issue is closed. Do you know what we're not gonna talk about between now and election day? We're not gonna talk about Benghazi and we're not gonna talk about the Teapot Dome scandal. And the reason why is obvious. Nobody fucking cares anymore, dumbass.
The Daily Beast is paying Ben Domenech money to write such things? I had no idea it was so easy to fleece the unsophisticated.
on October 23, 2015