For Profit Colleges Are a Scam 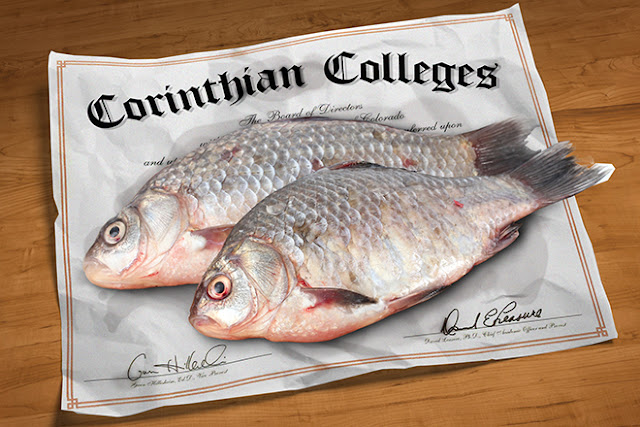 The thing that really bugs me about the collapse of Corinthian Colleges is that we've known there were problems with this method of education for years. Now, the wolf is at the door:
Pittsburgh-based Education Management Corporationsaid it would gradually shutter 15 of its 52 Art Institute campuses, which currently serve about 5,400 students. Students enrolled at the closing schools will be able to finish out their degrees, but the schools will stop enrolling new students. Schaumburg, Illinois-based Career Education Corporation also said it was undergoing a restructuring that would include selling all but two of its university holdings. It plans to close its 14 Sanford-Brown College and Institute campuses and online programs in the next 18 months and sell three of its other colleges. Altogether, those institutes enroll about 8,600 students. The company had already announced that it is selling its Le Cordon Bleu Colleges of Culinary Arts and shutting down its Harrington College of Design in Chicago.
The Obama Administration has been fighting the next debt bubble that will threaten the economy--student load debt. Thanks to these for-profit schools, real damage has been done to the economy. The taxpayers are out millions and the students are walking around with suspect degrees and a mountain of debt.
Given everything we've known since 2012 and earlier, which you can read here, there's no question that the enablers of the for-profit debacle have been wrong about everything and wrong like nothing you've ever seen before:
In mid June, the Department of Education put for-profit Corinthian Colleges out of business. Citing the company’s failure to respond to claims it had fudged jobplacement data and falsified attendance records, the department placed a 21-day hold on any additional federal loan and grant money due the institution. Corinthian’s 107 colleges — serving 72,000 students under the Heald, Everest, and Wyotech brands — draw 83 percent of their revenue from federal sources, and the firm was already reeling from two years of declining enrollment and a dozen state-level investigations. Despite Corinthian’s $1.6 billion in revenues in 2013, the department’s hold left it without enough cash to pay the bills. In early July, the firm agreed to sell most of its campuses and close the rest. The announcement sent a shock through the for-profit sector. The Obama administration’s bloodlust for such schools had put the industry on its heels since 2009. But before June, none of them had been effectively forced out of business by the government. Education Department officials themselves must have realized that they had overstepped, and feigned ignorance that the hold would be the final nail in Corinthian’s coffin.
Many conservatives were understandably outraged by the administration’s coup de grâce. The Wall Street Journal editorial page called it an “extraordinary violation of due process . . . akin to a judge issuing the death penalty while a case is in discovery.” Economist Richard Vedder called it an “ideological victory at the expense of many poor younger Americans.” A longtime Wells Fargo analyst of the sector called it a “chilling and aggressive new level of oversight.”
The first hint that there was something seriously wrong is buried in this piece of delusional nonsense--Corinthian Colleges was turning a billion dollars in profits in 2013 and it couldn't pay its bills? Hello? Is this thing on?
Well, it wasn't just Corinthian--it seems to be an industry-wide problem. As in, the whole thing was rotten to the core. And it has always been rotten. A for-profit school is a predatory aspect of modern society. There is no incentive to apply real standards to anything because money talks.
That last part stings a little bit because I attended Brown Institute in Minneapolis in the late 1980s.
Sanford-Brown Colleges (SBC) and Institutes (SBI) will no longer enroll new students in its programs and will begin what’s called a “teach-out.” A teach-out is a gradual discontinuation of operations that affords our students a reasonable opportunity to complete their programs of study before a campus ultimately closes. We’re entering these teach-outs -- instead of immediately closing the schools -- because we remain committed to the success of the students who have enrolled in our programs. We made the difficult decision to teach out all of our other Sanford-Brown campus locations after several years of declining enrollment and financial losses.
So long, Brown. I paid way too much for a broadcasting certificate which, to this day, remains absolutely worthless in terms of the return on investment. I think I paid out thousands of dollars for which I got back about a solid year of working in the radio industry, which collapsed because the technology of automating radio stations improved to such an extent that it made no sense to employ people anymore. The most I ever made, in late 1980s dollars, was about $850 a month. A month. And even then, I said to hell with living and working in Atlantic, Iowa because why wouldn't you? Things were so tight then that if I had been able to make a little more than $900 a month I probably would have stayed in radio.
I cannot imagine the feeling of being ripped off like that in these modern times, where debt is permanent and unsustainable for people who can't find a job that will pay them enough to live on and then repay the insane amount of money that Corinthian Colleges and the like have been charging them over the years (and, in the case of people using their 21st Century GI Bill benefits, charging you, the taxpayer).
Everything is a grift nowadays, and the grift gets more and more complex. You might as well bet disaster capitalism if you want to get ahead.