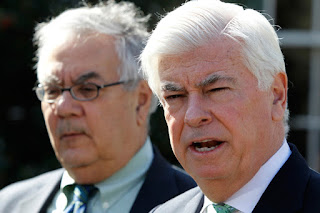 Don't look now, but deregulation is making a comeback, albeit a half-hearted one. You can hear the screaming from a long way off--government is too big! Too intrusive! Let's all be libertarians! So what if your bank folds or your house burns down? The private sector will save us all!
Paul Krugman reminds us why government regulation is a damned good thing to have now and then:
Dodd-Frank addressed this problem by letting regulators subject“systemically important” financial institutions to extra regulation, andseize control of such institutions at times of crisis, as opposed to simply bailing them out. And it required that financial institutions in general put up more capital, reducing both their incentive to take excessive risks and the chance that risk-taking would lead to bankruptcy.
All of this seems to be working: “Shadow banking,” which created bank-type risks while evading bank-type regulation, is in retreat. You can see this in cases like that of General Electric, a manufacturing firm that turned itself into a financial wheeler-dealer, but is now trying to return to its roots. You can also see it in the overall numbers, where conventional banking — which is to say, banking subject to relatively strong regulation — has made a comeback. Evading the rules, it seems, isn’t as appealing as it used to be.
As the economy improves, and as stronger regulations build a stronger banking sector, confidence in the economy should improve. Fewer people are being subjected to predatory lending practices--this means fewer foreclosures, less neighborhood blight, and an overall improvement in the economy. This is due in large part to Dodd-Frank, which is working and shouldn't be dismantled.
Yeah, it's slow going and it probably sucks to be a banker, but oh well.
on May 11, 2015