This is What is Wrong With Kansas 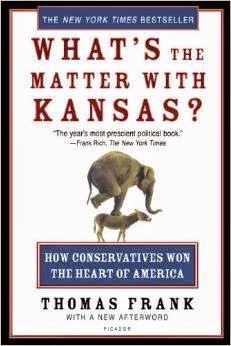 Kansas, once home to farmers who marched against "money power," is now solidly Republican. In Frank's scathing and high-spirited polemic, this fact is not just "the mystery of Kansas" but "the mystery of America." Dismissing much of the received punditry about the red-blue divide, Frank argues that the problem is the "systematic erasure of the economic" from discussions of class and its replacement with a notion of "authenticity," whereby "there is no bad economic turn a conservative cannot do unto his buddy in the working class, as long as cultural solidarity has been cemented over a beer." The leaders of this backlash, by focussing on cultural issues in which victory is probably impossible (abortion, "filth" on TV), feed their base's sense of grievance, abetted, Frank believes, by a "criminally stupid" Democratic strategy of triangulation. Liberals do not need to know more about nascar; they need to talk more about money and class.

He could release his book today and nothing would have to change in his premise. That's because the people of Kansas re-elected Sam Brownback despite the fact that he has ruined the state with conservative ideology:

State figures released Tuesday showed that tax revenue came in $11.2 million below expectations in March, the latest in a string of lower-than-expected tax receipts.

Lawmakers must fill a $344 million revenue shortfall by June, and Brownback has moved to plug Kansas’ fiscal hole by slashing education funding, gutting the state’s pension fund, and cutting infrastructure. Additionally, the governor has proposed new sales taxes, which disproportionately impact the poor, in order to proceed full steam ahead with his income tax cuts for corporations and the wealthy.

While personal income tax revenue was above expectations last month, the Topeka Capital-Journal reports that revenues from oil and gas, sales, and corporate income taxes were well short of what analysts had projected, largely owing to a state economy whose performance is less robust than the Brownback administration had predicted. Given that Brownback aims to eventually eliminate income taxes, the state will depend on those other sources of revenue in the years to come.

That's all well and good, but everyone is happy because there are no RVs where women can get free abortions all day long.
on April 02, 2015