Conrad Hilton Gets Away With Threatening to Kill the Peasants 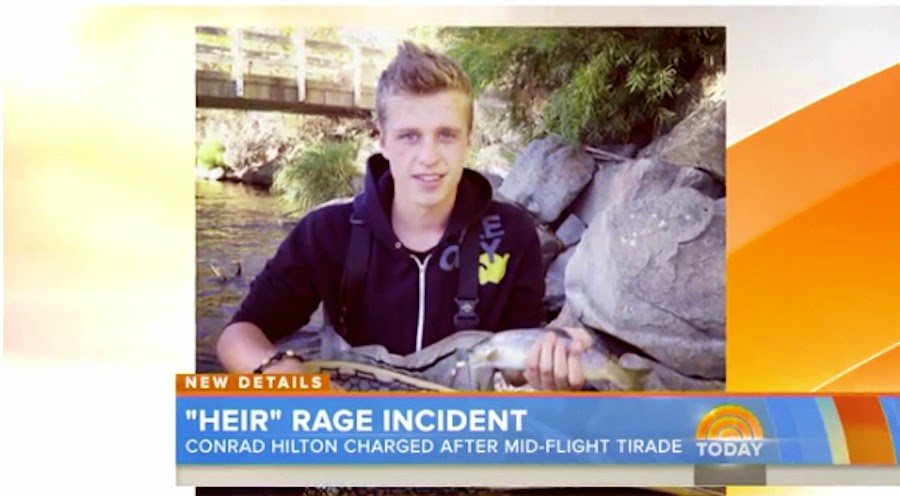 You should not be surprised to learn that Conrad Hilton III is not going to go to prison:

Conrad Hughes Hilton III, Paris Hilton's youngest brother, will plead guilty to a single misdemeanor charge of simple assault Tuesday in a July 2014 incident in which he allegedly threatened to kill crew members and the co-pilot of a British Airways flight.
Federal prosecutors agreed to recommend probation for Hilton, 21, in a plea deal that saw them drop felony charges of interfering with a flight crew, which could have sent the young millionaire to prison for 20 years, according to court documents.

The FBI said in the original complaint that Conrad, the great-grandson of the Hilton hotel chain's founder, had to be restrained by five flight attendants on board British Airways Flight 269 last July during a series of profanity-laced tirades in which he accused the flight crew of "taking the peasants' side," threatened to fight the pilot, accused a fellow passenger of planning to "gay rape" him and threatened to kill a co-pilot and a flight attendant.

He also allegedly told the co-pilot, "If you wanna square up to me, bro, then bring it on and I will [EXPLETIVE] fight you," according to an affidavit.

You fucking peasants and your ridiculous laws. Master Hilton will adjust his cravat and leave you to your filthy lives. He has more important things to do than spend a moment in jail or accept responsibility for committing a blatant series of hate crimes while issuing terroristic threats on an international flight.

Do not forget this one serious aspect of his crime--it took five other people just to restrain him because of how violent his threats were.

Even the media is complicit in downplaying Hilton's hate crimes:

Paris' Brother Conrad Hilton to Get Probation in In-Flight Ruckus

There is no rule of law for the rich. None. What a travesty.
on March 16, 2015
Email ThisBlogThis!Share to TwitterShare to FacebookShare to Pinterest
Labels: Aviation, Bigotry, Commentary, Crazy, Crime, Hate, Justice, Law, Legal, News, Opinion