Can You Believe This is Happening in 2015? 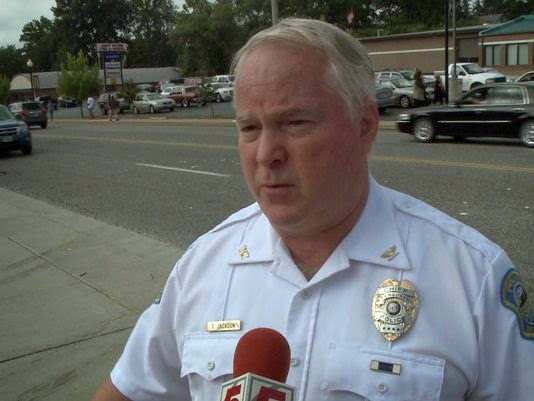 You would think that Ferguson, Missouri Police Chief Tom Jackson would have tendered his official resignation by now. You'd be wrong:

Ferguson, Missouri (CNN)Ferguson's police chief is ducking questions about his department and his future there in the wake of a scathing federal report.

"I need to have time to really analyze this report so I can comment on it," Chief Tom Jackson said Thursday.

He spoke one day after the Justice Department released its 102-page report, which found rampant racism within the Ferguson Police Department.

It specifically faulted officers for seeing residents as "sources of revenue," a practice that disproportionately targeted African-Americans.

When asked what he thought about the report, and what he planned to do about it, the chief said he would "take action as necessary."

Asked whether that meant he would remain at the department, Jackson repeated himself: "I'm gonna take action where necessary."

My reaction to all of this is to shut down the blogs and run for the hills. That's what I want to do when confronted by institutionalized racism on a scale that enriches a community and allows an entire population of people to be terrorized year after year.

What do you do in the face of something like this? It's not normal. This is not what America was supposed to end up being for these citizens. That's not what an American town is supposed to look like. And this is a man trying to hold onto a job he failed at because he refused to change the things that were wrong. He's no different than a thief because his salary has been paid many times over by the money confiscated from the African American citizens of the city that he's supposed to protect. This man has a wad of cash in his pants that he didn't earn because he never said no to the idea that created Ferguson in the first place. He never said stop.

See, it's bad enough that there was a mindset in Ferguson that saw African-Americans as a cash cow for the municipal police force. It was there, for example, twenty years ago. And, as each year went by, cops came and went. People moved in and out of the community. America's economy rose and fell. Our grasp of American society changed--attitudes changed. And, year after year, the people running this American city saw fit to continue a policy of stripping wealth from people based on the color of their skin entirely because no one said anything as simple as stop.

This police chief never said stop. He was the status quo and he remains the reason why there has been no progress on race. He's one of the many, in fact, because no one fired him. No one under him quit in protest. The people who held power knew they had a problem and they continued that problem well into the year of our Lord 2015 because stop wasn't in the vocabulary of anyone decent or brave. Hey, maybe someone did say stop. Nobody listened. The chief never listened. He's made a nice living for himself, a comfortable Middle Class life based on forcing people to give every penny they could lay their hands on to keep themselves from ending up in jail.

Think of the human misery of Ferguson. Citizen after citizen, caught in petty crimes, given bogus tickets, threatened with warrants and further fines. Think of the pain caused by having to pay a simple ticket for someone who doesn't have the money. Think of the kids who went without food, clothes, shoes, toys, or comfort because the man you see above couldn't say stop.

Federal control of this city wouldn't bother me in the least. It should be considered occupied territory until the civil rights of the people living there are restored.