This is How Crazy America Is Right Now 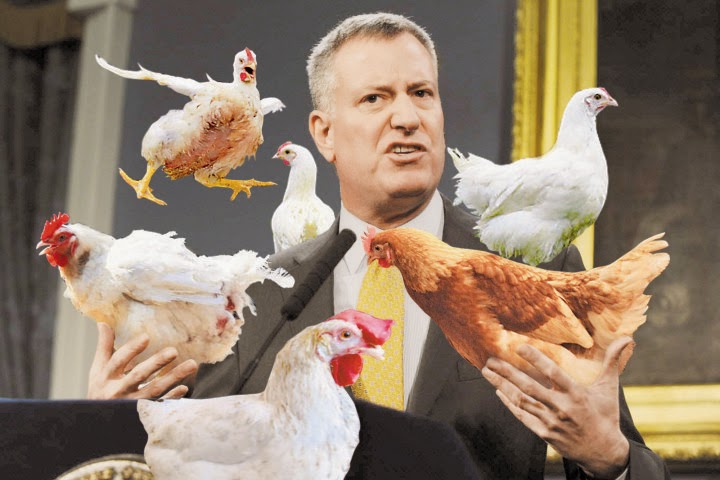 I don't expect sanity, but it would be nice to see it once in a while. This is what I'm talking about--this is how crazy things are in this country:

For Mayor de Blasio, last week was one he’d like to forget. It started with brickbats over a botched plan for a blizzard that fizzled, and it was all downhill from there.

By the end, he was battling something more pernicious than either Mother Nature or Gov. Cuomo. That would be political allies whose actions point up once again the dangers of his radical anti-police agenda.

The Mayor of New York City put in place plans to deal with what the National Weather Service was calling a major winter storm. The storm did not bring as much snow as was expected so, of course it's de Blasio's fault. If he hadn't prepared for the storm, that would be his fault as well.

But this is the kicker:

Similarly, just as de Blasio called the $5,000 payoff on the police shooting the result of a “broken policy,” it was his policy. He has made no secret of wanting to settle pending lawsuits quickly, without regard to the merits, which invites others to make frivolous claims.

Some settlements he approved have been outrageously expensive, with just three big cases carrying a price tag of $157 million: $98 million in a disputed class-action discrimination case in the Fire Department, $18 million to protesters arrested at the 2004 GOP national convention, and $41 million to the Central Park Five.

So, de Blasio makes a lawsuit go away for as little as $5,000 and then Michael Goodwin finds fault with the fact that the real high price tag lawsuits--the ones that could have cost hundreds of millions of dollars for incidents that happened long before he became mayor--have to be settled?

I guess instead of blaming President Obama for everything, we should blame Mayor de Blasio. Jeebus.
on February 01, 2015