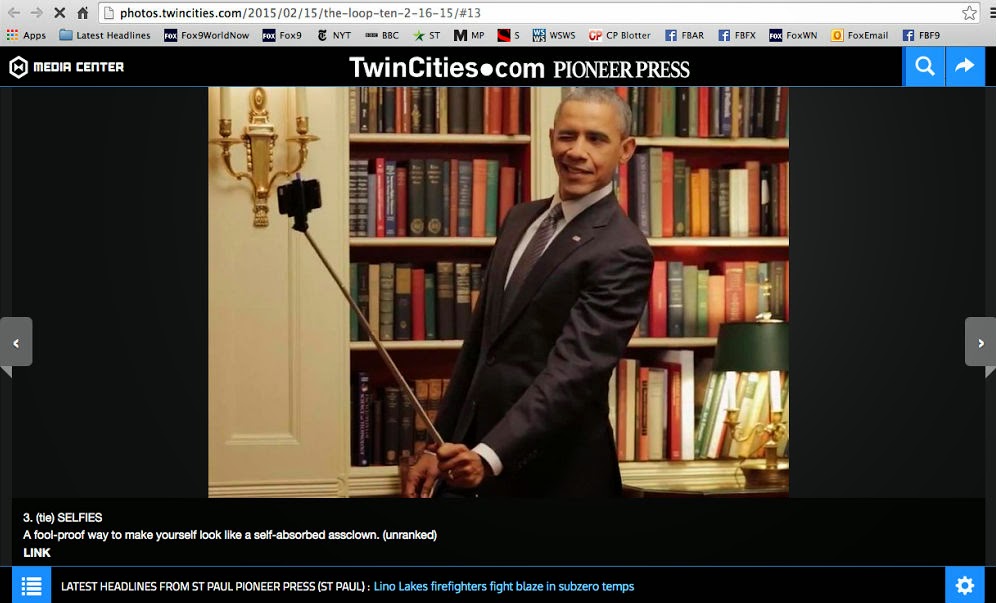 This morning, [what used to be called] the [St. Paul] Pioneer Press created some waves by calling President Obama an "assclown."

The off-color remark came in the context of the PiPress's "Loop Ten" feature, which is a slideshow that serves as sports

Clocking in at a tie for number three in today's installment was "selfies." That entry is accompanied by an image of Obama holding a selfie stick in an apparent effort to take a photo

That's all well and good, but where Cusick got himself in trouble was with the text below the image.

"A fool-proof way to make yourself look like a self-absorbed assclown," it said.

You can be rest assured that having a sports guy call the President of the United States an assclown isn't shocking or new in any context except one--when it appears on the website of a newspaper. That's a whole new ballgame, unless we're talking about a paper owned by Rupert Murdoch.
The unfortunate series of photos that accompanied an Internet interview with the President allowed for two things to happen. One, it humanized the President, who is often accused of being cool and aloof. Two, it handed conservatives all across the country more fodder for their insane diatribes against the President, as if they needed any assistance.
This was a sports guy that did this? Goodness, what a shitty life the ethics department has at the old paper. Will they fire this guy? Who knows? Wouldn't surprise me if it blew over and nothing happened. This is how far we have fallen in political discourse. You can call a Democrat anything you want. Call a Republican anything equal to or stronger than "proven serial liar" and you'll reap the whirlwind.
The St. Paul Pioneer Press used to be one of my favorite papers. I read it and I delivered it as an adult, but that was in the early 1990s and all that has turned to murky memories and badly-remembered times. This was a major American newspaper at one point, home of some interesting journalism and commentary. They abandoned the Pioneer Press as a brand and called themselves "TwinCities.com" in the modern era of the Internet. That's a shame--a throwback, iconic name would be a hot property right now if the paper could muster any talent or ability to cover the news.
As you can see, it cannot.
on February 17, 2015
Email ThisBlogThis!Share to TwitterShare to FacebookShare to Pinterest
Labels: Branding, Discourse, Ethics, Journalism, Media, News, Newspapers, Politics