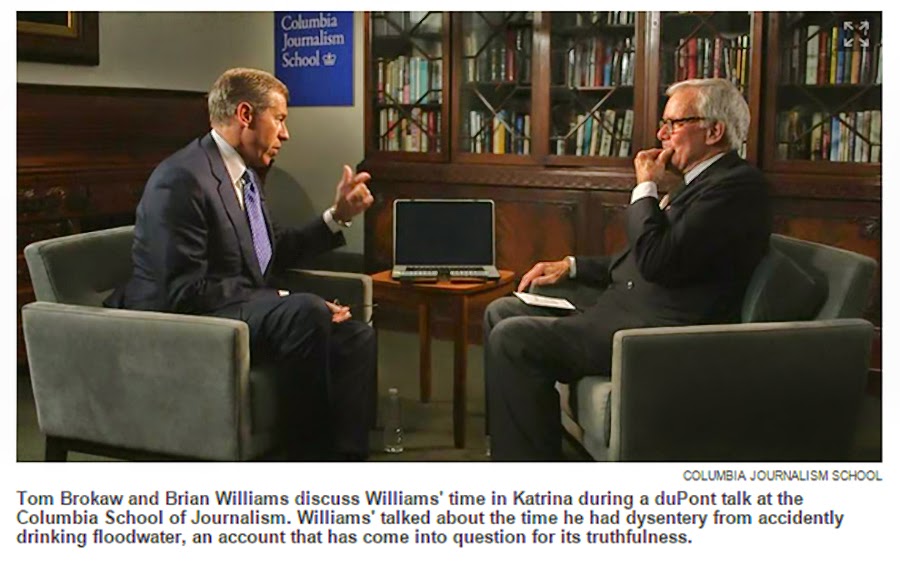 What the hell happened to the very public effort to give NBC Nightly News anchor Brian Williams a pass for having a faulty memory?

“NBC Nightly News” anchor Brian Williams is now the target of an internal investigation for lying about dodging danger while reporting in Iraq, sources told The Daily News.

The probe is being led by Richard Esposito, who heads NBC’s investigative unit, they said.

Esposito previously worked as an investigative correspondent at ABC and before that was an editor at The Daily News.

I get that Williams is a popular, well-liked person. I'm sure that this is genuine.

The problem I've had with all of this does not boil down to resume padding or trying to glom onto the Greatest Generation myth as applied to the men and women who fought in Iraq and Afghanistan. It's not even about paying respect to Veterans (although, we live in a weird country where we idolize, revere and remember veterans while refusing to give them benefits, jobs, and adequate health care).

We tend to forget that Brian Williams is supposed to be an elite journalist. A newsman. Someone who rose to the top ranks of his profession by being good at the craft of journalism. This is what pays his ten million dollar a year salary (or thereabouts). This is why he is supposed to be respected and liked.

He is now a journalist who can't remember what actually happened to him when it was happening to him.

Full stop on that. I will reset things so that we can pause and reflect.

How come Brian Williams can't remember what happened right in front of his face? He was there. He was in the middle of all of this. He's the one who gets paid the big bucks to tell people the truth of what he witnesses and give an account of such things for widespread public consumption. I am not a purist--he can give his opinion. But what were the facts?

Where's the journalism part here? Where did it go?

At a time when actual news was happening to Brian Williams, who is a journalist, he got it wrong, puffed it up over time like any braggart would, and had to apologize. His professional reputation now sits in tatters. But, where's the journalism in all of this? The kind they learn at school. Where are his notes? Where is evidence he practiced his trade? Can he point to examples where he recorded what was happening to him when he was not getting shot at? Does he have a notebook, a journal, a diary, a written or typed account or a video account of any of this?

Why should I care what happens to a guy who isn't good at the one thing that would have saved his ass from being embarrassed in the first place?
on February 06, 2015