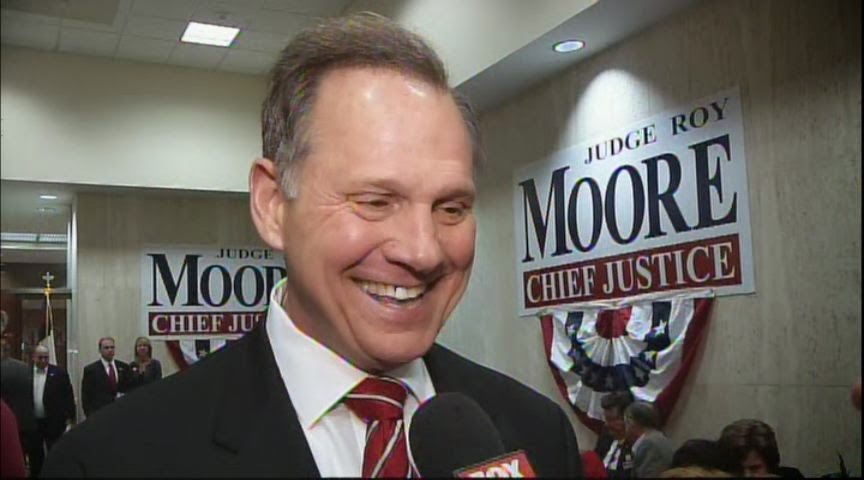 Chief Justice Roy Moore continues to be an embarrassment to chief justices everywhere:

Alabama's controversial Supreme Court Chief Justice, Roy Moore, urged the state's governor on Tuesday to oppose a federal judge's decision to strike down the state's gay marriage ban, saying "we must act to oppose such tyranny" being imposed by "judicial fiat."
Moore, known for unsuccessfully trying to block the removal of a plaque bearing the Ten Commandments that he'd installed at the state courthouse in 2001, told Gov. Roy Bentley in a letter that nothing in Alabama's constitution allowed the federal government to "redefine" marriage to include gays and lesbians. The state supreme court, he said, has described marriage as a "divine institution."

"Today the destruction of that institution is upon us by federal courts using specious pretexts based on the Equal Protection, Due Process and Full Faith and Credit Clauses of the United States Constitution," he wrote in the letter posted to AL.com.

He sounds like the sort of fellow President Jeb Bush would put on the Supreme Court. But real tyranny is when you allow the law to be applied in a separate and unequal manner, especially in the context of using dogs to confront protesters.

Allowing Bruce and Steve to get married isn't tyranny because they're not going to blow up little girls in churches or murder people if they don't get their way. They may rethink the insanity of living in Alabama and expecting the application of the rule of law in a reasonable manner, but that's what elections are for.

There aren't many people willing to use this kind of hyperbole. If Moore feels that granting rights to Americans is tyranny, what does he think real tyranny looks like?
on January 28, 2015