The No Accountability League 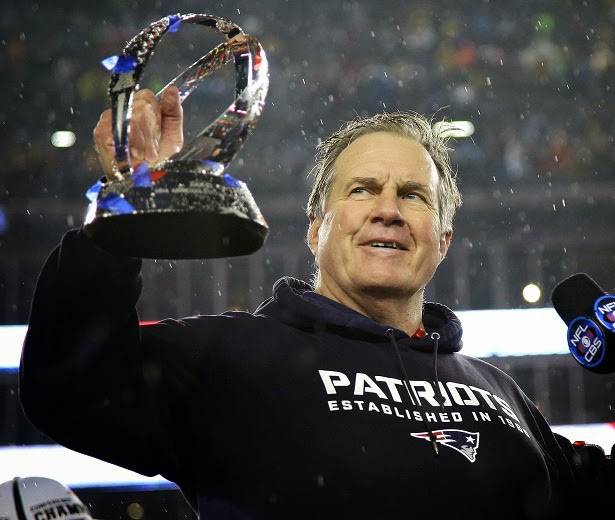 The New England Patriots are a team of cheating liars who lie. So they're just like any other NFL franchise that wins. They'll do anything to make good things happen. They're terrible at getting away with it.
So, when it comes to Ballghazigate or whatever they're calling it, please. Nothing will happen and nothing will be done that will have any significant impact on anything that matters:

The season that began with the NFL not knowing what to do about Ray Rice will end with one Super Bowl participant being suspected, not for the first time, of cheating. Commissioner Roger Goodell likes to say his job is to Protect The Shield, meaning the longstanding NFL logo. We’re about to see if he means it.

You wouldn’t think the New England Patriots, winners of three Super Bowls this millennium, could be considered a rogue outfit, but they are. In 2007, they were found to have filmed other teams’ defensive signals in violation of the rules and their coach was fined $500,000, and it’s widely accepted in league circles that the Patriots and Bill Belichick aren’t above anything in their pursuit of victory.

Bob Kravitz of WHTR reported after Sunday’s AFC championship that the Indianapolis Colts believed the footballs had been underinflated. (The suspicion took wings after D’Qwell Jackson intercepted a pass thrown by Tom Brady, who has said he prefers underinflated footballs.) Late Tuesday, ESPN’s Chris Mortensenreported that the NFL has found that 11 of the 12 footballs used in open play were inflated below league specifications — this after the balls were inspected by the officiating crew barely two hours before kickoff.

Now, they could tell the Patriots that next season is completely off limits and that they are banned and that the NFL will reinstate them in a year, but that's not happening, either.
Forget the fans, by the way. The gamblers must be furious. You can destroy the integrity of the game, but don't you dare fuck with the spread.
on January 21, 2015