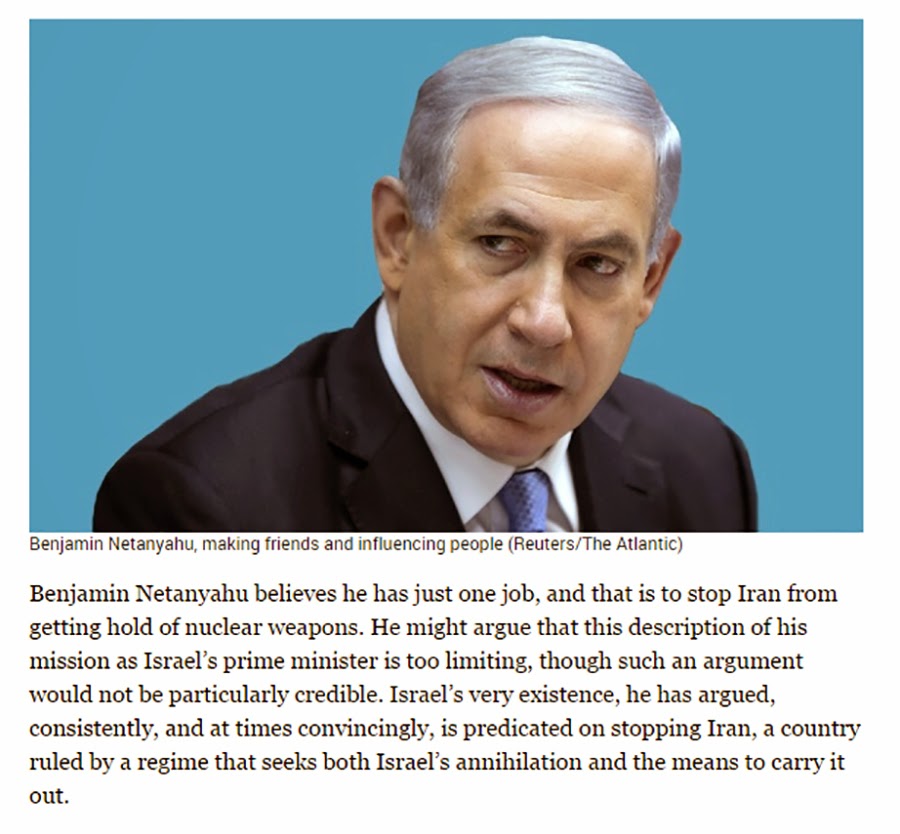 Jeffrey Goldberg writes about Israel's obsession with stopping Iran from getting nuclear weapons and how Benjamin Netanyahu is the wrong man to accomplish this task:

[...] the only other way for Netanyahu to stop Iran would be to convince the president of the United States, the leader of the nation that is Israel’s closest ally and most crucial benefactor, to confront Iran decisively. An Israeli strike could theoretically set back Iran’s nuclear program, but only the U.S. has the military capabilities to set back the program in anything approaching a semi-permanent way. And only the United States has the throw-weight to organize sanctions regimes of lasting consequence.

For several years, Netanyahu and President Obama, despite their mutual loathing, worked more or less in tandem on this issue. Netanyahu traveled the world arguing for stringent sanctions, and Obama did much the same. In fact, Obama used Netanyahu’s tough posture to America’s advantage: On several occasions, Obama and officials in his administration played good cop/bad cop, telling other world leaders that toughening sanctions on Iran would be the only way to forestall an Israeli attack, and this line of argument often proved effective.

The focus here is on the wrong thing. You have the leader of Israel trying to start a war with Iran and you have the President trying to use diplomacy. Why are we not celebrating that effort? Successfully preventing wars doesn't lead to anything anymore in terms of real benefits for the incumbent President You are almost better off starting a war and letting "the next guy" finish it for you and take the blame for anything that goes wrong. The American people just don't care about foreign policy anymore, period.

If the Republicans think they can run in 2016 on the issue of support for Israel, they are mistaken. Americans want us to be friendly and continue to "save" Israel but they have never punished Obama for refusing to start a war on behalf of Israel. Even George W. Bush understood this.

Why doesn’t Netanyahu understand that alienating Democrats is not in the best interest of his country? From what I can tell, he doubts that Democrats are—or will be shortly—a natural constituency for Israel, and he clearly believes that Obama is a genuine adversary. As I reported last year, in an article that got more attention for a poultry-related epithet an administration official directed at Netanyahu than anything else, Netanyahu has told people he has “written off” Obama.

Someone advising Netanyahu has put it in his ear that there won't be any Democrats to negotiate with by the time the 2016 campaign is done; that's a wrong-headed notion. Control of the U.S. Senate could easily swing back to the Democrats in the next cycle and every sitting Republican Senator of note understands this fact. They are a temporary thing, given the demographics of the Senate and the presidency as far as elections are concerned. The House is safely Republican thanks to gerrymandering; unfortunately, you can't apply that magic to the Senate or the Executive.

This is why I fear a Hillary Clinton presidency--being tough with Israel is not going to be possible for her because of a need to have exceptional toughness that would not normally be applied to a male president. She will be under enormous pressure to use force, a la Margaret Thatcher, and she will be backed into conflicts we should not have to fight. She will be bullied into giving Netanyahu everything he wants.

If she tells everyone to go pound sand and that she will make peace wherever she can, good for her. We have had enough of the permanent wars of the early 21st Century. We cannot keep fighting forever.
on January 27, 2015