A Drawing Has Never Killed Anyone 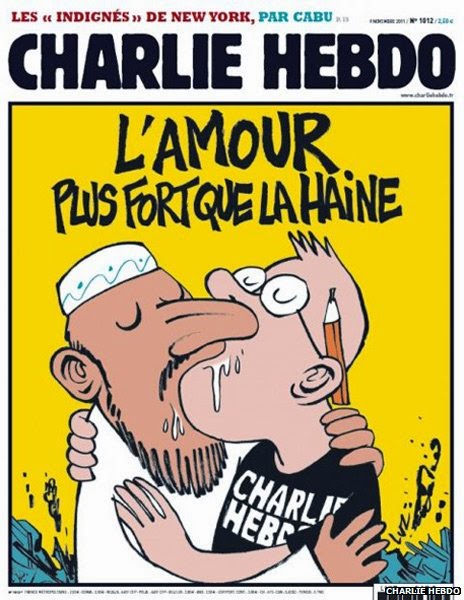 The satire business took a major hit this morning. If jokes can lead to gunmen, and twelve people dead, then it really is time to think closely about what it is about Western Civilization that is such a threat to the medieval minds that have hijacked the Islamic faith.

This is not about a sly group of French cartoonists mocking people. This is about the silence and intimidation this attack just purchased. The French police have some criminals they need to capture and the whole idea of a free press capable of mocking religion and everything else has come under fire. Will this lead to more repression and fear? Will it keep people from speaking out?

I would be willing to bet on defiance from the French people. Innocent people who follow the Muslim faith will suffer because of the actions of criminals. This is a chance to speak to the idea of standing up to fear.

It is here, in the far east of the French capital, that the publisher and editorial staff of Charlie Hebdo have worked since their former editorial offices were destroyed a year ago in anarson attack. Although no one claimed responsibility for the crime, it was apparently motivated by cartoons about Islam that the magazine had published in a special issue under the polemical title "Charia Hebdo," a reference to Islamic Sharia law.
Now the magazine and its Editor-in-Chief Stéphane Charbonnier, who is also a cartoonist himself, are back in the headlines. The satirical magazine has triggered a storm of indignation with its publication of cartoons of the Prophet Muhammad this week. Representatives of the French Council of Muslims, prominent imams and French government officials have all criticized the professional polemicists, who violate political, social and religious taboos on a weekly basis. France has stepped up security at its embassies and other institutions abroad as a precaution.
The US government also expressed concern at the publication of the cartoons. "We don't question the right of something like this to be published, we just question the judgment behind the decision to publish it," said White House spokesman Jay Carney.
'Extremists Don't Need Any Excuses'
But Editor-in-Chief Charbonnier, who is known to his colleagues as "Charb," appears relaxed despite the uproar. Surrounded by TV crews from Japan, Qatar, Belgium and South Africa, as well as French journalists, he sits at his desk in the corner of a large room, where he creates his cartoons. He sees himself mainly as a journalist who is just doing his job. "The accusation that we are pouring oil on the flames in the current situation really gets on my nerves," says Charbonnier. "After the publication of this absurd and grotesque film about Muhammad in the US, other newspapers have responded to the protests with cover stories. We are doing the same thing, but with drawings. And a drawing has never killed anyone."
The cartoonist claims he doesn't want to deliberately provoke anyone. "We publish caricatures every week, but people only describe them as declarations of war when it's about the person of the Prophet or radical Islam," says Charbonnier. "When you start saying that you can't create such drawings, then the same thing will soon apply to other, more harmless representations."