There is No Bear 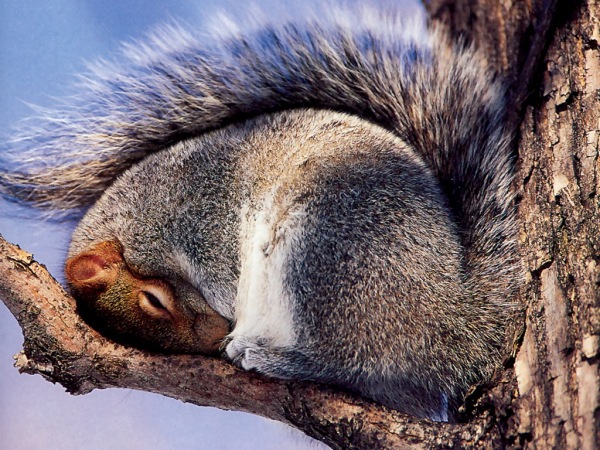 The bear is no longer applicable when considering the Russian state or the character of the people in it. The squirrel is far more appropriate.

Russian President Vladimir Putin lashed out at the West on Thursday for causing his country's economic crisis, saying it would take two years to recover.

"Sometimes I think, maybe they'll (the West) let the bear eat berries and honey in the forest, maybe they will leave it in peace," Putin said at a news conference in Moscow, using a metaphor to refer to Russia's famed symbol. "They will not. Because they will always try to put him on a chain, and as soon as they succeed in doing so they tear out his fangs and his claws."

Putin's address comes amid plunging oil prices, sanctions from the West over his actions in eastern Ukraine and a ruble currency that has lost more than half of its value in recent months.

The squirrel is harmless and lives only where there are nuts. He's in the food chain, but he's not at the top or the bottom. He's the Belgium of the rodent world. The squirrel gets fat on the nuts and then goes into a form of hibernation when it gets cold. Their numbers ebb and flow with the availability of nuts, and, for the Russians, oil serves as their version of the nuts that fall from the trees. You only notice the squirrel when he rears up and lets loose with a stream of chirps; otherwise, he's a nice fellow and you don't mind having him in your yard. As soon as one goes rogue, the other squirrels will shun him and go back to getting fat.
The Russians are a tough people. Money has always been an illusion for them. They will endure the hardship--the shortage of nuts, if you will--and you'll see them next Spring. They are not predators, Ukraine notwithstanding. The Russian character is that of a gatherer of things found on the ground now and not someone who marches through the winter months, driving out invaders and then carrying home whatever can be dragged out of Central Europe on a donkey cart. In the old days, the Russians would be having the apartment blocks of Kiev dismantled and taken further East. Now, they tinker with the borders and shoot down planes that can't shoot back.
There is no Russian "bear" anymore. That bear died when the Russians realized that their junk and their declining birthrate were an inevitable fate. They should have thrown open the borders and absorbed anyone and everyone who wanted to make a life. They should have wedded capitalism to cheap energy costs and they should have set up a system of law that would have guaranteed basic rights for everyone who wanted to build a glorious country. They should have codified the idea that if you make something, you will never go hungry. If they had unleashed the power of millions of disaffected people and turned them into the factory of Europe based on regulated capitalism, their diversity would have overwhelmed their disadvantages and you'd be seeing a different kind of leader in Russia and a radically altered framework. To do that, they would have had to have tolerated the idea of a Middle Class, something Russia will never have under Putin.
Russia is a state on the fringes of Europe that has a wrecked economy that has been looted by kleptocrats and allowed to stagnate because this man Putin couldn't lead anything for very long. He should have been shot behind the ear when he violated the Russian constitution (whatever is left of it) and ran for the job he will now hold until he dies. If there is misery in Russia, then it is because no one had the courage to get rid of the old judo master once and for all. They are now wedded to his bungling and his outdated method of looking tough.
Russia needs a wheeler-dealer who can make suckers out of the bankers in Germany, not a poet who thinks about honey and berries while imagining himself mounting another man's wife.
on December 18, 2014