Thank You For Your Service Now Go Away 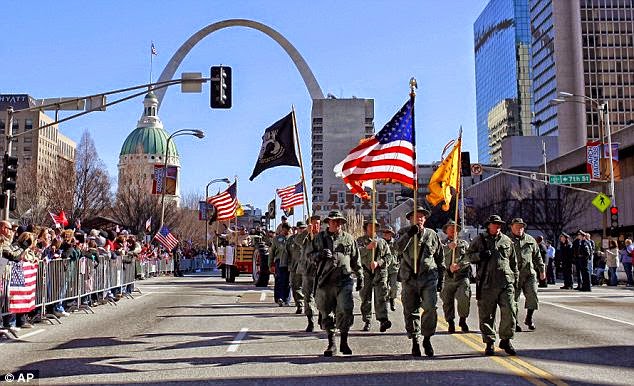 James Fallows has a lengthy article about the current American mentality towards Veterans and their service. Here, he finds someone who really nails it:

Seth Moulton told me about his experience as a marine during the Iraq War. Moulton enlisted after graduating from Harvard in 2001, believing (as he told me) that when many classmates were heading to Wall Street it was useful to set an example of public service. He opposed the decision to invade Iraq but ended up serving four tours there out of a sense of duty to his comrades. “America was very disconnected. We were proud to serve, but we knew it was a little group of people doing the country’s work.”

Moulton told me, as did many others with Iraq-era military experience, that if more members of Congress or the business and media elite had had children in uniform, the United States would probably not have gone to war in Iraq at all. Because he felt strongly enough about that failure of elite accountability, Moulton decided while in Iraq to get involved in politics after he left the military. “I actually remember the moment,” Moulton told me. “It was after a difficult day in Najaf in 2004. A young marine in my platoon said, ‘Sir, you should run for Congress someday. So this shit doesn’t happen again.’ ” In January, Moulton takes office as a freshman Democratic representative from Massachusetts’s Sixth District, north of Boston.

What Moulton described was desire for a kind of accountability. It is striking how rare accountability has been for our modern wars. Hillary Clinton paid a price for her vote to authorize the Iraq War, since that is what gave the barely known Barack Obama an opening to run against her in 2008. George W. Bush, who, like most ex-presidents, has grown more popular the longer he’s been out of office, would perhaps be playing a more visible role in public and political life if not for the overhang of Iraq. But those two are the exceptions. Most other public figures, from Dick Cheney and Colin Powell on down, have put Iraq behind them. In part this is because of the Obama administration’s decision from the start to “look forward, not back” about why things had gone so badly wrong with America’s wars in Iraq and Afghanistan. But such willed amnesia would have been harder if more Americans had felt affected by the wars’ outcome. For our generals, our politicians, and most of our citizenry, there is almost no accountability or personal consequence for military failure. This is a dangerous development—and one whose dangers multiply the longer it persists.

There has been absolutely zero accountability for the debacle of America's wars of choice against the tactic known as terrorism. The elites are never, ever going to submit their children to such a thing as war, not in my lifetime will that happen. So I cannot understand the fascination people have with Hillary Clinton. Her vote for the Iraq War sunk her in 2008 and it should still be sinking her now. War has been discredited as a foreign policy solution or choice. She represents a Democratic Party that is too hawkish and given to foreign misadventure. She's the establishment choice, and she have to play the role of the Iron Lady.

Are we supposed to hand the country over to another Clinton who didn't serve in the military and who will have a blind spot on foreign policy that will all but force her to use the military to solve problems so that she won't look feckless and weak? Is she going to use diplomacy or military solutions if she's surrounded by neocons or foolish Republican Senators?

The ideal candidate for 2016 is going to be someone who has served in the military and has been right about the Iraq War and almost everything else. That's not anybody named Clinton or Bush and that's not a person who actually exists in this country because, hello, we don't have that kind of a society anymore.

I can guarantee you one thing--I am going to be mighty disappointed for a long time. I don't expect anything good to happen in 2016, I really don't. The American people are not going to hand the country over to Hillary Clinton without giving the Republican Party a pass that it does not deserve. We are going to end up with hawkishness because that's what "wins the morning." The long term strategies practiced by this President, which, as an example have strangled Russia's economy, are going to be replaced by bluster and by troops on the ground in places where they should not be deployed. And that's going to happen no matter who wins.

Veterans are going to get the shaft coming and going, though. That's my point. Nobody wants them, nobody hires them, and everyone pays them lip service. Stop thanking them for their service and actually do something, like, you know, give them a job or vote for someone who isn't going to start another damned war.
on December 28, 2014