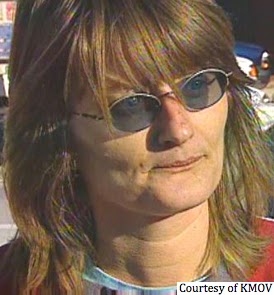 The Smoking Gun has been looking into the aftermath of the decision not to indict Police Officer Darren Wilson, who shot Michael Brown in Ferguson, Missouri.

Someone over there figured out who Grand Jury Witness Number 40 was. Her name is Sandra McElroy and she happens to be well, you're not going to believe what this crazy bag of nuts did:

Sandra McElroy did not provide police with a contemporaneous account of the Brown-Wilson confrontation, which she claimed to have watched unfold in front of her as she stood on a nearby sidewalk smoking a cigarette.

Instead, McElroy (seen at left) waited four weeks after the shooting to contact cops. By the time she gave St. Louis police a statement on September 11, a general outline of Wilson’s version of the shooting had already appeared in the press. McElroy’s account of the confrontation dovetailed with Wilson’s reported recollection of the incident.

In the weeks after Brown’s shooting--but before she contacted police--McElroy used her Facebook account to comment on the case. On August 15, she “liked’ a Facebook comment reporting that Johnson had admitted that he and Brown stole cigars before the confrontation with Wilson. On August 17, a Facebook commenter wrote that Johnson and others should be arrested for inciting riots and giving false statements to police in connection with their claims that Brown had his hands up when shot by Wilson. “The report and autopsy are in so YES they were false,” McElroy wrote of the “hands-up” claims. This appears to be an odd comment from someone who claims to have been present during the shooting. In response to the posting of a news report about a rally in support of Wilson, McElroy wrote on August 17, “Prayers, support God Bless Officer Wilson.”
After meeting with St. Louis police, McElroy continued monitoring the case and posting online. Commenting on a September 12 Riverfront Times story reporting that Ferguson city officials had yet to meet with Brown’s family, McElroy wrote, “But haven’t you heard the news, There great great great grandpa may or may not have been owned by one of our great great great grandpas 200 yrs ago. (Sarcasm).” On September 13, McElroy went on a pro-Wilson Facebook page and posted a graphic that included a photo of Brown lying dead in the street. A type overlay read, “Michael Brown already received justice. So please, stop asking for it.” The following week McElroy responded to a Facebook post about the criminal record of Wilson’s late mother. “As a teenager Mike Brown strong armed a store used drugs hit a police officer and received Justis,” she stated.

Here's the thing, though. Sandra McElroy wasn't there. She didn't witness anything.

She just made it up.
It turns out that McElroy is the crazy person who shocked everyone with her testimony. She's also the person who started a bogus fundraiser and has what could generously be called absolutely zero credibility. Read the whole thing--it will cause you to question absolutely everything and then nothing about our system of justice because, quite frankly, if the people who wanted Darren Wilson to get away with murder hadn't been blessed with Sandra McElroy, they simply would have gone out and manufactured their own version of her, no question about it.
McElroy is why the Justice Department needs to send fifty lawyers and some seriously skilled detectives to Ferguson, Missouri, pronto.
on December 16, 2014