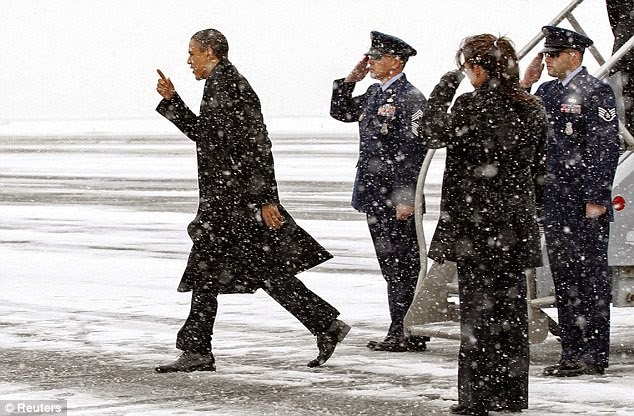 If this is what a failed presidency looks like, wait til you remember what it was like to live during the Bush years:

They say failure can be a good teacher, but, so far, the Obama administration is opting out of the course. The post-midterm period has been one of the most bizarre of the Obama presidency. President Obama has racked up some impressive foreign-policy accomplishments, but, domestically and politically, things are off the rails.

Usually presidents use midterm defeats as a chance to rethink and refocus. That’s what Obama did four years ago. Voters like to feel the president is listening to them.

But Obama’s done no public rethinking. In his post-election news conference, the president tried to reframe the defeat by saying the turnout was low, as if it was the Republicans’ fault that the Democrats could only mobilize their core base. Throughout that conference, the president seemed to detach himself from his own party, as if the Democrats who lost their jobs because of him were a bunch of far-off victims of some ethereal malaise.

Usually presidents at the end of their terms get less partisan, not more. But with his implied veto threat of the Keystone XL oil pipeline, President Obama seems intent on showing that Democrats, too, can put partisanship above science. Keystone XL has been studied to the point of exhaustion, and the evidence overwhelmingly suggests that it’s a modest-but-good idea. The latest State Department study found that it would not significantly worsen the environment. The oil’s going to come out anyway, and it’s greener to transport it by pipeline than by train. The economic impact isn’t huge, but at least there’d be a $5.3 billion infrastructure project.

And there's that word--malaise. Obama is Jimmy Carter, you see! Conventional wisdom dictates that because this President's political party lost seats in the Congress during the mid-term election of his second term, well, he's a failure and a poof and it's winter and everything might as well be dead for all we know.
Rhetorical question--how much more peace and prosperity do you need?
Unemployment is down. The deficit is plunging. Gas is less than $3 a gallon. America has no existential enemies because Vladimir Putin cannot seem to go nipple to nipple with the sad sack clown running Australia and hundreds of thousands of U.S. troops are in garrison, not Baghdad. For the first time ever, you can get sick and reasonably expect to not go bankrupt because the health care insurance provided by this president at a massive political cost is making lives better for millions of Americans. There is still an American auto industry. There are still places in America where people make things that the world wants to buy. Oh, and if you're a woman, watch out. Everyone who was just elected to Congress wants to stick a transvaginal probe into your private parts to convince you that the abortion you are considering is going to be illegal as soon as they can run more clinics out of business.

Every single indicator mentioned above was flying in the wrong direction during the last 18 months of the Bush Presidency. It was a whirlwind of fear and failure to defy reason. All of the indicators going the right way under Obama were sailing into the stratosphere under Bush. I mean, good Goddamn people. It wasn't even a decade ago.
This president has given people something better than hope. He provided a little less fear. He made it okay to consider things that, seven years ago, weren't possible (like finding a job, having a retirement, and selling your house). And, for that, people like David Brooks give him the back of their hand and make silly comparisons to Jimmy Carter on the sly.
Neither president has ever deserved the criticisms he has faced given the debacles of the last three Republicans to hold the office of President. I mean, for fuck's sake, what's it going to take for people to get it? President Obama can only kill Osama bin Laden for you clowns once.
on November 18, 2014