Don Lemon is a National Embarrassment 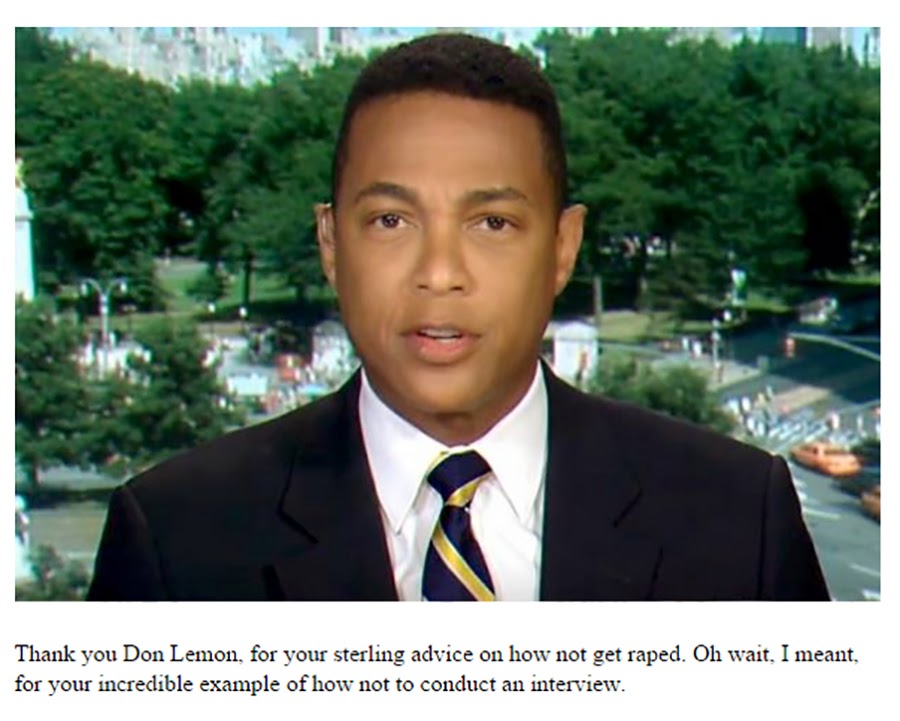 Let me just say up front--considering the sad decline of television news, Don Lemon fits in perfectly with his colleagues. He's no worse than Sean Hannity or Ed Schultz. He's a complete and utter buffoon and a clown in a nice suit who can read well on television. He's a national disgrace:

Speaking on “CNN Tonight” with Joan Tarshis, one of the women who has recently come forward to accuse Bill Cosby of sexually assaulting her, the reliably clue-deficient Lemon went down a particularly unorthodox line of questioning. Speaking with the now 66 year-old Woodstock resident, he gently led with “Can I ask you this, because — and please, I don’t mean to be crude, OK?” Lemon inquired about her assertion that Cosby had given her something to drink and that the next thing she remembers is being undressed on his couch, and coming up with a hasty fib to stop him. “You lied to him and said ‘I have an infection, and if you rape me, or if you do — if you have intercourse with me, then you will probably get it and give it to your wife,’” Lemon said, and she assented. “And you said he made you perform oral sex,” he said, and again she assented. That’s when he came back with, “You know, there are ways not to perform oral sex if you didn’t want to do it.”When she replied that “I was kind of stoned at the time, and quite honestly, that didn’t even enter my mind. Now I wish it would have,” he told her, “Right. Meaning the using of the teeth, right? As a weapon. Biting.” To which she simply replied, “Ouch.”

Lemon's approach to being a television news anchor extends into asking questions no one should ask. As in, "did a black hole swallow Malaysian Flight MH370?" as if that were a viable option. And it is true--Lemon himself has been subjected to awful comments and unfair criticism.

Should he even be on television? That's not my call. I don't think he has any credibility left. If that means he can thrive in the news business, hey. So be it.
on November 19, 2014