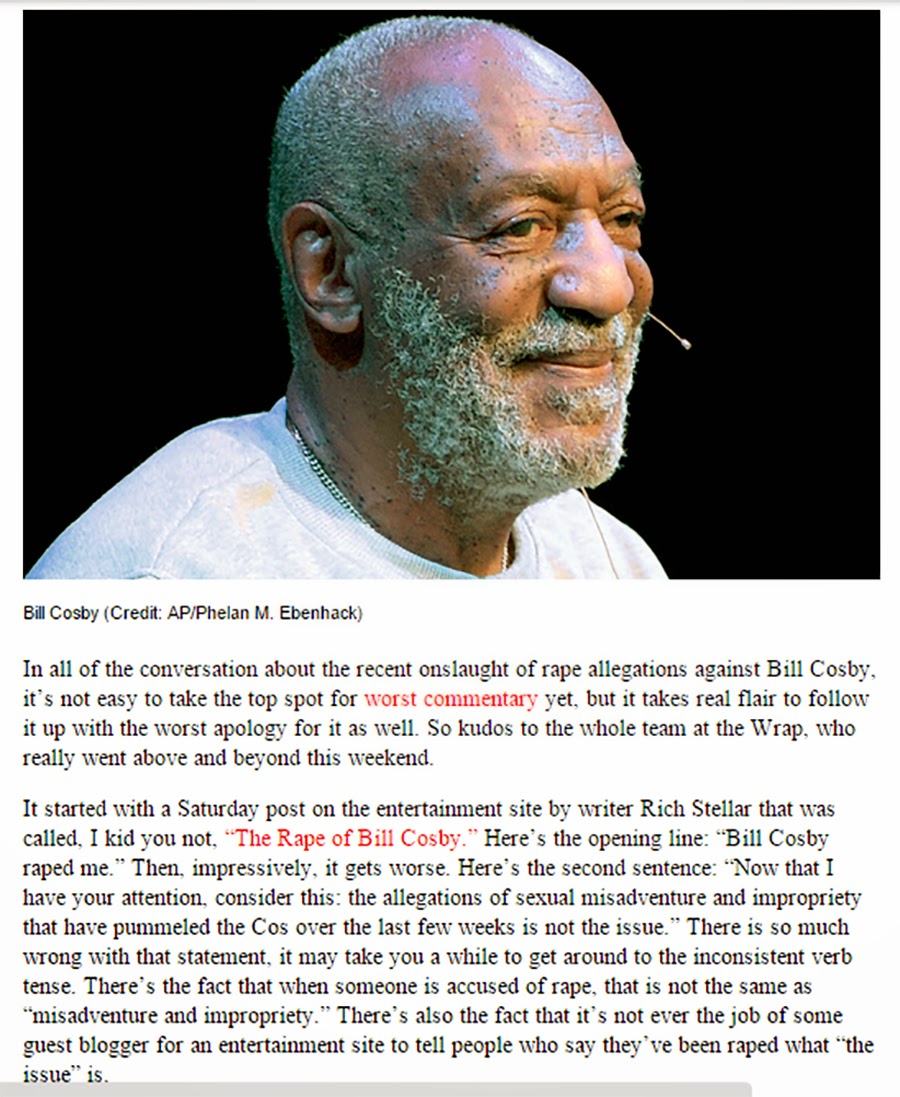 When you see pieces like this, you come away with the realization that many commentators are not equipped to deal with big stories. Bill Cosby's public meltdown has been the biggest story of the year, culturally speaking, in this country. His downfall is even bigger than the sad story of the suicide of Robin Williams.

In the case of Williams, a man who was far more successful artistically than Cosby experienced a late-in-life decline in health that led him to depression. These factors caused him to take his own life. Cosby's artistic accomplishments are largely forgotten by American society because Cosby himself was an utter failure in the movies. He made movies that were so indulgently bad he managed to make Chevy Chase look like a genius of American cinema.

What we now know is that Williams was loved. Countless people cried at the news of his death. Cosby is still very hated and despised by those who came into any kind of contact with him that involved money or sex, but there is still nostalgia for one of the many sitcoms he has peddled over the years,

That's not to say that Cosby isn't still being considered innocent and powerful right now. He is due a small amount of credible innocent-til-proven-guilty that wouldn't pass the muster in the English system of law, which allows for multiple victims to make a credible case against the accused (we don't do that here).

Cosby's power derived from him being able to intimidate and talk down to other human beings. That has been on the wane in recent years. You may have forgotten his CBS sitcom or any of a number of shows that have attempted to monetize the Cosby personality and outlook--many of them were short-lived and had to be disposed of when they stopped working. The CBS show was choleric and miserable at times, but they threw an Emmy at it anyway. I remember it as televised amateur hour and Madeline Kahn should have been afforded the chance to do something else.

Cosby appears to have been feared by those who knew him and loved only in the abstract. He used moral authority to secure a place in the American consciousness that looked to him as a necessary scold. Cosby reinforced the idea that black people were to blame for their lack of success and he was rewarded for this stance. What legitimized him was the money he made on television and the degrees that he acquired.

Robin Williams was terrified of his own celebrity at times; Cosby demanded that people remember his celebrity, always. Has there ever been another man so adept at giving America one version of himself that didn't look anything like who he really was? He was the Nixon of comedy, and I have no idea why people are still expecting him to make a comeback, either.

You are witnessing the downfall of a man who once owned prime-time television in the 1980s. The view from the bottom has to be depressing enough. It is readily apparent that Robin Williams didn't have that kind of a career trajectory. Williams exploded and then rose and fell based on his choices and the material. People did tire of him, like they tire of everyone. But Williams was insistent on doing solid things and worked like an artist for as long as he could, struggling through a late-career foray into television that didn't embarrass anyone like having to sit through a Doug E. Doug scene, carried out like a lazy ad-lib at a time when Cosby couldn't have been more irrelevant.

He has not been relevant in years. He has been able to make money talking down to people and we, as a culture, really need to examine the lives of the people who we have hired to tell us what's wrong with us. When someone can tell Cosby to pull his own damned pants up and mean it in the worst possible way, something is seriously wrong.

Anyway, I choose to celebrate Williams even more now, knowing full well that he probably did some horrible things and was imperfect. I don't recall him ever using a PhD to lecture people about how they went about their lives. The only person he seemed to want to knock out was himself.
on November 24, 2014