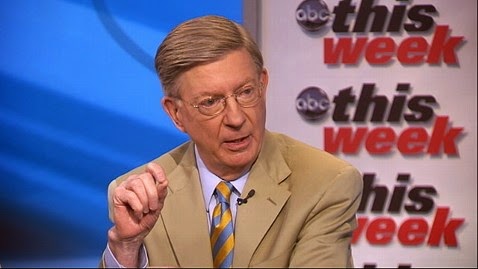 George Will has no idea what "rape" actually is and he can prove it for you:

Consider the supposed campus epidemic of rape, a.k.a. “sexual assault.” Herewith, a Philadelphia magazine report about Swarthmore College, where in 2013 a student “was in her room with a guy with whom she’d been hooking up for three months”:

“They’d now decided — mutually, she thought — just to be friends. When he ended up falling asleep on her bed, she changed into pajamas and climbed in next to him. Soon, he was putting his arm around her and taking off her clothes. ‘I basically said, “No, I don’t want to have sex with you.” And then he said, “OK, that’s fine” and stopped. . . . And then he started again a few minutes later, taking off my panties, taking off his boxers. I just kind of laid there and didn’t do anything — I had already said no. I was just tired and wanted to go to bed. I let him finish. I pulled my panties back on and went to sleep.’”

Six weeks later, the woman reported that she had been raped. Now the Obama administration is riding to the rescue of “sexual assault” victims. It vows to excavate equities from the ambiguities of the hookup culture, this cocktail of hormones, alcohol and the faux sophistication of today’s prolonged adolescence of especially privileged young adults.

Now, I'm not an editor, but I play one on TV. And if I was the editor of this piece, and if George Will had submitted it to me, I would have written, in red ink across the part that I just quoted, "Mr. Will, this is rape. Plain and simple."
I mean, "dude. THAT'S RAPE." It really is.
Holy jeebus. How can you read that and not slap your forehead?
It does not matter if they had a previous relationship--forced sex is rape.
It certainly does matter that they mutually ended their relationship--his forced sex on her was rape because they had mutually determined that there was no existing relationship.
It does not matter if they had gotten in bed together--forced sex is rape.
It does not matter if she did not fight back--forced sex is rape.
What was outlined above was sex that was forced onto a woman by a man who was told "no." That is rape.
If the Washington Post still employs George Will--who clings to definitions and ideas that have been overtaken by events and who acts as if his medieval understanding of the current culture is relevant in any way--by the end of today, they are complicit in the mistaken notion that it's not rape if you only force it on her a little or once saw her bathroom area during happier times. By keeping this man gainfully employed, they endorse a creepy old man's outdated understanding of sex between two adults and have no credibility to engage on anything.

ABC News and the WaPo give this man a sinecure and allow him unfettered access to the political process as it is being butchered by the media. They should be shamed and hounded for allowing this creepy old futz to show up and obsess about college rape culture again and again.

Hey, bro. THAT WAS RAPE YOU JUST DESCRIBED ABOVE OMG! I mean, honestly. Wow.
George Will represents addled and confused thinking that demonizes victims and says that, hey, rape's okay by me when she has it coming.
What a disgrace this man has showered upon himself.
on October 07, 2014