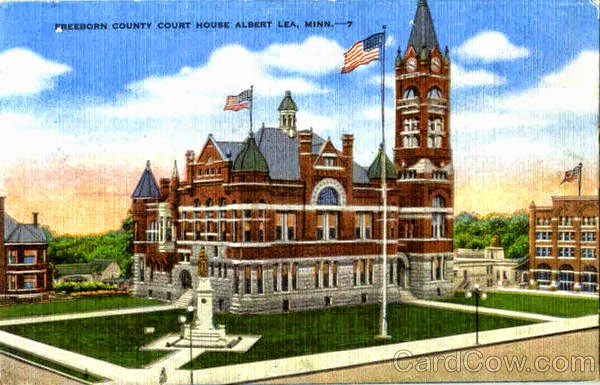 I want to take you down to the local level and talk about a Southern Minnesota issue. If you look at what happened in Ferguson, Missouri, this is definitely not that serious. This is not a case where someone has lost their life. It is a case where things are out of control and where someone could end up hurt as a result of what is transpiring on a daily basis as we move to election day.

The Freeborn County Sheriff's Department is essentially at war with itself right now, and purely as a matter of public safety, the State of Minnesota should send the State Police to take control of the department away from all current employees until it can be professionalized and reorganized.

The sideshow over the race for Sheriff has reached the point where the safety of the public is being compromised in broad daylight:

Fingers point in wake of ruckus over ownership

An internal investigation is underway into an allegation of disorderly conduct involving a deputy running for Freeborn County sheriff.

The deputy, Kurt Freitag, said the allegation is untrue and claims Freeborn County Sheriff’s Office detective Marc Johnson is behind the ruckus.

Johnson, when contacted Monday, declined to comment, noting there was still an open investigation.

The investigation, by the Washington County Sheriff’s Office, is looking into whether Freitag engaged in a physical altercation with Albert Lea resident Jim Bronson during an argument about a political sign. The incident reportedly took place Sept. 30 while Freitag was off duty.

Freitag is running against incumbent Sheriff Bob Kindler in the Nov. 4 general election.
County Administrator John Kluever said Freitag has not been placed on administrative leave and he was unsure how long the investigation would take. No criminal charges against Freitag are expected to be filed.

J.D. Carlson, deputy director of police with the Albert Lea Police Department, said Bronson had political signs for Freitag and Kindler in his yard, but he had painted over the Freitag sign to have a circle with a slash through it.

The argument was about who owned the sign, which was 24 inches by 18 inches, and whether Bronson had a right to alter it. Bronson resides at 819 Freeborn Ave. in Albert Lea, and the sign was in his backyard near the intersection of St. Jacob Avenue and Sheridan Street.

What happened then was a complete and utter breakdown of civil society, right in the middle of Albert Lea, in broad daylight. Freitag got into a physical altercation over the sign, thereby rendering him a poor choice for anything other than the Asshole of the Month Club. The problem is, Freitag has to get in line behind Kindler and Johnson, who got there ahead of him and have disgraced themselves as law enforcement professionals by virtue of all of the things going on behind the scenes.

I mean, good Lord. We're rioting on the block over some jackass and his constitutionally protected right to post a sign in his yard?

And that's not the half of it. The entire race is soiled and nasty, floating across the five foot deep waters of Albert Lea Lake like a diaper weighted down with the Hershey squirts. If you find that or a sunken campaign sign or a pig's head on the end of your hook when fishing there, run, son. Run. You used the wrong boat launch, Bubba. The whole thing is that nasty. Think of that moment where you abandoned a pair of underwear and tried to flush your socks down the toilet, all confused and sad at the same time and unable to remain out in polite society. It's just like that.

Websites are being opened up, anonymously, and are filled with lies and claims that have no bearing on who is fit to be Sheriff. Someone is accessing law enforcement databases to produce confidential information that the public isn't normally given access to in order to discredit the other candidate. And the phony baloney letter to the editor campaign is a travesty--you can't expect the poor Albert Lea Tribune to figure out who's a crank and who's real because they can't stop printing racist and stupid letters to begin with.

After the election, what then? Bear in mind, this is about maintaining power or gaining power. It has nothing to do with the quaint idea that the best person should step up and have an honest disagreement with the incumbent or who should rise to the top of the heap in a community and handle things like a professional.

Neither Bob Kindler nor Kurt Freitag should be Sheriff of anything, ever. Neither one of them are fit to serve. And what's been revealed here is that the citizens of Albert Lea are exposed by this unprofessional and criminal conduct to a breakdown of public safety.

The first and only consideration should be to carry out an honest campaign to earn the right to protect the public. Neither Kindler nor Freitag should been given that privilege ever again. Until such time as the department can be investigated and reorganized, the Minnesota State Police should be given the duty of protecting rural citizens in Freeborn County.

A good fifteen or twenty minutes out in the country is where a lot of people live. They are not close to town, they live down gravel roads  and their safety is in the hands of children right now. The physical safety of a great number of people engaged in farming activities and the like is in the hands of a brawling mass of clowns. That's a disgrace and it needs to end immediately.
on October 14, 2014