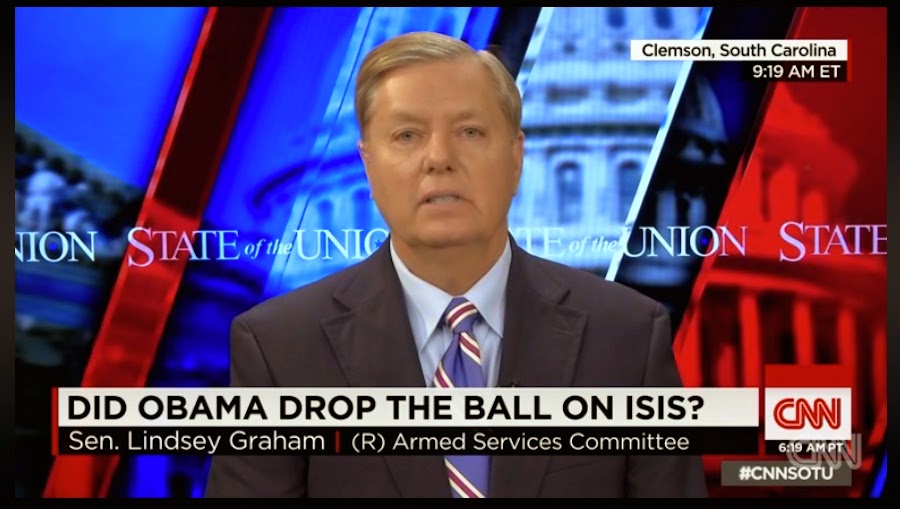 Senator Lindsey Graham actually said that bombing ISIS from the air will not work. He thinks we should have "boots on the ground" instead of bombing from the air, whatever any of that means. From a logistical point of view, and from a status of forces agreement point of view, for us to do one or the other would require the United States military to prepare for a long and costly war after being bled white by the last one.
Senator Graham never met anyone he wouldn't bomb and here he was a year ago:

Republican Senators John McCain and Lindsey Graham are pounding their fists for intervention in Syria after reports of chemical weapons being used. They have called for bombing Syrian air bases, arming the rebels and readying an international force to secure chemical weapons stocks. McCain was quick to say, though, he did not want American boots on the ground because that would be “the worst thing the United States could do right now.”

Although McCain and Graham hide under the pretense of humanitarian intervention and securing national interests, they are paving the way for another war in the Middle East. Bombing Syrian air bases to create a no-fly zone would have little effect on saving civilian lives. The Syrian Air Force has 555 combat capable aircrafts, but they have not been used against civilians. Helicopter gunships have attacked civilians, but an NFZ would have to be far more extensive to protect against them. Unlike regular aircrafts, helicopters can quickly depart, attack, and land necessitating more surveillance and striking capabilities to remove them.

So, no boots on the ground, but bomb the hell out of them from the air. That's what will work. Wait, no, here he was last month:

“We commend President Obama for ordering last night’s air strikes against ISIS and the Khorasan Group in Syria, and the U.S. military for the skill and courage with which it carried out this operation,” the two said in a joint statement.

I'm confused. What will work and what won't work? Will bombing work? Are the boots scattered around and left for the non-existent troops to fill once they're brought into the country with a supply chain that no longer exists? What about bombs that only hit people on the head and bounce off of them? Will that work?

This guy can't go one day to the next without flip-flopping on whether or not America bombing people is a good thing or not.
on October 05, 2014