I have watched the hilarious races happening in Albert Lea like everyone else has--with a mixture of sadness and horror.

Peggy Bennett is/was/couldabeen an electable (not batshit crazy!) teacher in Albert Lea who now fancies herself a "Constitutional Conservative." This means that she believes:

A COMPASSIONATE CONSERVATIVE WHO WILL SEEK TO…
Create economic growth and ensure opportunity for all
Respect and care for all constituents, from the unborn to the elderly
Consider present, as well as future generations

That's from her own website. She places Second Amendment rights ABOVE the First Amendment (as a teacher, you'd think she could count and order things properly) and she opposes the school breakfast program: 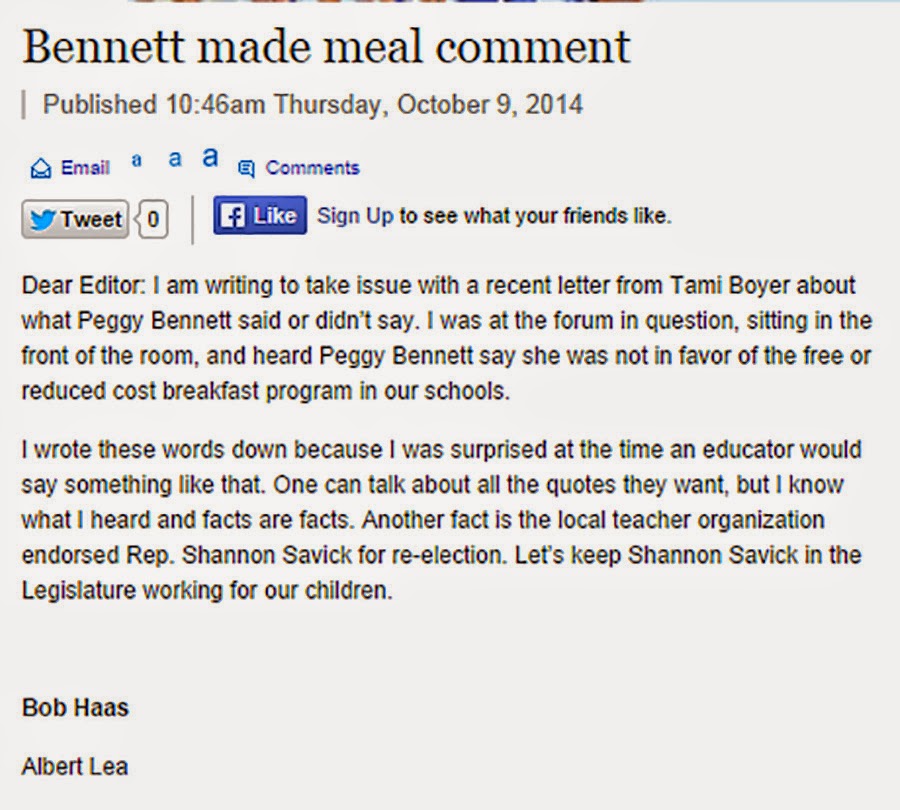 Typically, when someone says "I was there and I wrote it down," they're usually good with their facts. I think that it's plain to see that Peggy Bennett wants guns in school, not butter for the kids. She's all about the unborn, but, like all other conservatives, as soon as you've been born, you're on your own, sucker. My comments are not unfair at all. Her own website, which is where she wrote down who she is and what she's about, says so.
Why would you run as a teacher and not mention education as being your strong suit right up front? Why would you take the word "electable" and put it on there first? Is that because there is great concern throughout the region that you are unelectable and dispirited and can't see straight when you're praying to Jesus for free guns for the kiddos? Why would you talk about guns? Mind you, this is happening in a community that is not far from where a nutjob of a kid nearly shot up and blew up schools in Waseca and then ended up with severely reduced charges.
How does she feel about guns in school, anyway? Concealed carry? Shouldn't every teacher and every student in Albert Lea be allowed their Konstituzional right to bear arms and pack heat?
How does being the teacher for guns work in a community where there are no jobs and where nobody has any money? Someone needs to work on jobs for Albert Lea. Someone needs to match education with economic development so that the area is producing a work force that can find gainful employment and survive. By all means, let people have all the guns they want. They can pay for them with the welfare benefits Peggy Bennett wants to cut and they can use the savings from letting kids go hungry all day in school to deliver a tax break for gunsmiths and someone who can sell extra large ammunition clips.
I'm not even going to get into what's happening with the race for Sheriff. One day, I will probably be driving in Albert Lea and I don't want Sheriff Bob Kindler's syndicate to disappear me into Eastern Iowa. If there was ever a less appealing subject than the Freeborn County Sheriff's election, I don't know what it would be. Somehow, Albert Lea was taken over by a cabal of sneaky men with kooky websites that say mean things. Until things die down, I can assure you, Albert Lea still pretty much sucks.
on October 09, 2014