Joe Klein is Too Stupid to Recognize Racism in His Midst 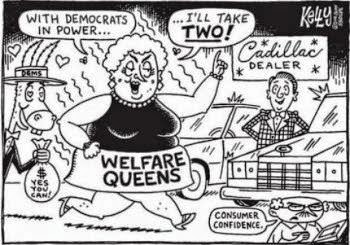 I have heard the T-bone steak and orange-soda riff a number of times on road trips in recent years. It is always T-bone steaks. Sometimes it’s dog food too. Is it true? Maybe so; there are food-stamp abuses, no doubt. Or maybe it happened once, someone saw it, and the story spread, sprayed into the atmosphere by talk radio. It is now an urban (and rural) legend. The food-stamp stories mix with more purposeful fantasies spread by interest groups, like the National Rifle Association’s constant spew that the government wants to “take away” your guns rather than merely regulate their use. And then there are the immigrant stories: Kostelka heard about a carload of Mexicans stopped by the local police without driver’s licenses or proof of residency. “And they were given a fine and set free,” he said. True, no doubt, but incomplete: fewer would-be immigrants have been crossing the border in recent years, and the Obama Administration has been sending record numbers back home.

The "Welfare Queen" meme runs through American society like shit through a goose--it's as phony as hell, it stinks, and everyone is convinced that it's true no matter what the facts say.
People on welfare are not rich. People who come here to work do so because wealthy business owners know they can get away with hiring cheap labor and get rid of them when they don't need workers. Those that abuse the system and get caught are punished. The Border Patrol works the southern border of the United States in depth, catching untold numbers of immigrants. The vast majority of Americans who use welfare benefits of some kind do so temporarily. The vast majority of people who come here illegally to work are conservative in their social beliefs and don't break the law. It is much, much easier to accumulate stuff, buy things, and live well by having a job. That's true for everybody. When people don't have jobs, they see how stingy welfare really is and get off it as soon as they can. The Obama Administration has been sending illegal immigrants back to where they came from since day one.
The next time Joe Klein is talking with the people who make all of these claims, he should call bullshit on them and call them racist. That's all this is--racism and ignorance, tribal resentment and the mistaken belief that poor people cause all the problems in America.
on October 09, 2014