Barney Fife is Alive and Well in Freeborn County Minnesota 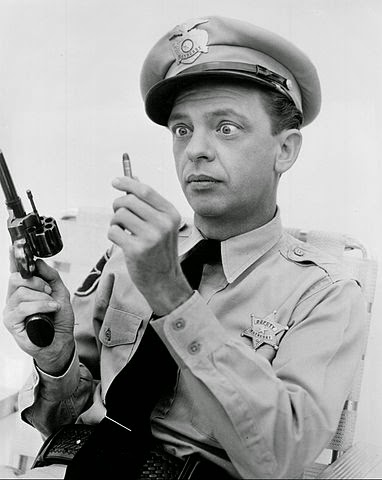 If even a tenth of this story is true, then my previous call to bring the State Police to Albert Lea, Minnesota and take over the Freeborn County Sheriff's Department should be repeated:

On April 7, I discovered that a substantial amount (over $13,000) of hog equipment and tools had been stolen from one of our locations in Freeborn County. I immediately called our local sheriff’s office. A deputy was dispatched, and he investigated the scene and a report was filed.

Sensing that not much was going to be done about it, I did a little investigating on my own. In less than 24 hours, I found not only where my stolen property was, but who did it, and where they lived. A scrap-iron yard in Kensett, Iowa, had a receipt with the thieves’ name on it and a picture of them with the stolen items. They are Albert Lea residents with a long criminal record who local law enforcement know well.

I excitedly called the Freeborn County Sheriff’s Office back with the information expecting that something would be done about it. I was then put in contact with detective Marc Johnson. To my disappointment, he told me that they could not cross the state line (which was not the truth according to other law enforcement officials I contacted). I also told him that if he were to go to their residence, he would find my additional stolen items that were not scraped out. He proceeded to do that and found them just as I described.

Asking him what he was going to do about it, he said that I should have the Worth County Sheriff’s Office take the case because it could probably do a better job. He also told me that he didn’t want to look like a fool if he couldn’t prove it.

Frustrated with detective Johnson, I then made several attempts to contact Sheriff Bob Kindler, who never once responded to my calls. Charges were never made by the Freeborn County Sheriff’s Office.

Somewhere in there, I would imagine something is missing--as in, what's the real truth? Is this campaign boilerplate? Is this a fabrication? I highly doubt it since it was signed by a Freeborn County resident with his own name. This is not the same as creating a fake website or anything like that.

If you go and find your property has been stolen, and if you find that it has been sold for scrap, and have proof of this, you've got to have the law on your side to try and make things right. If you go to their residence and find your stolen property, you've got to have someone backing you up. What happens if you don't is exactly what should never happen, which is a community where people have to take the law into their own hands.

I said it before and I'll say it again--this isn't about politics or who should run things. This is about public safety. If you want a community where incompetent cops run around saying things like "he didn't want to look like a fool if he couldn't prove it."