We Have Been Conditioned to Respect Wealth 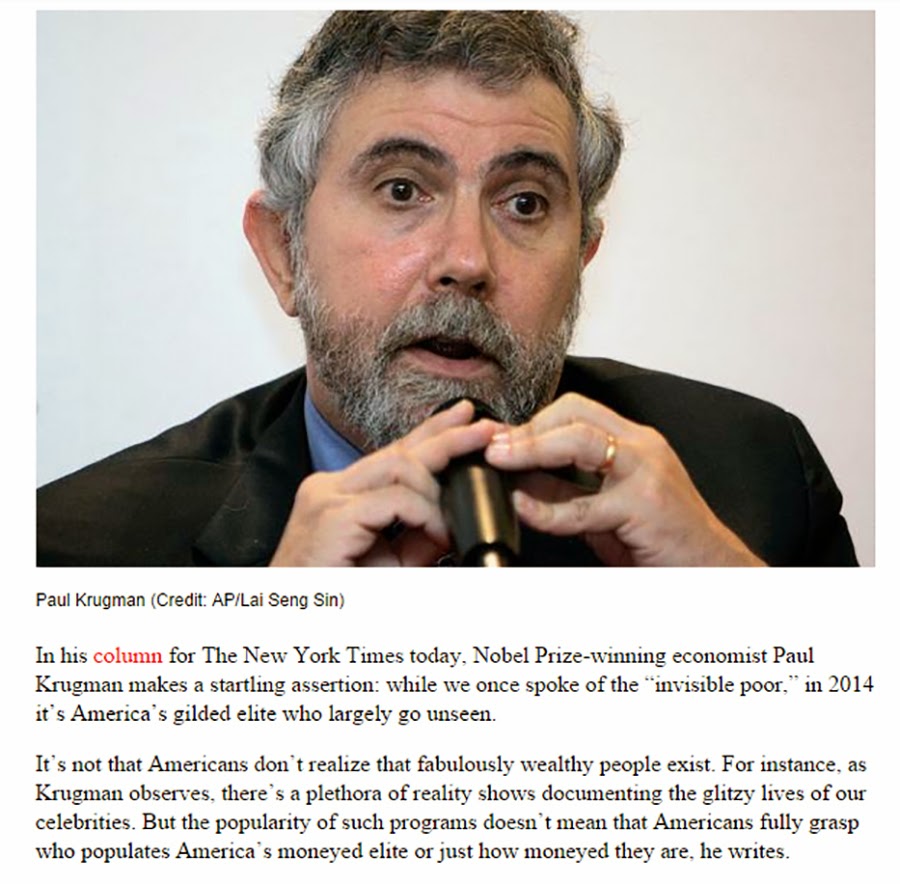 Paul Krugman has been on a tear lately. He has torn David Brooks into shreds and he is expanding on his usual portfolio, which is to explain why people are broke and can't get ahead anymore.

It’s a persuasive analysis. Even though Americans appear to believe that the CEO-worker pay ratio is roughly where it stood in the 1960s, they still express indignation at the level of income inequality in the country — and want policymakers to do something about it. AJanuary poll by Gallup found that 67 percent of Americans were dissatisfied with the distribution of wealth and income in the U.S., while a February CNN poll found that 66 percent of Americans want the government to take action to narrow the income gap between rich and poor. But 68 percent favored such action in 1983, and that wasn’t enough to stop four decades of neoliberal economic policy. That sobering statistic stresses the importance of bringing the full extent of income and wealth inequality to light.

We have been taught to respect wealth and that we are wrong to "envy" or "condemn" the rich for being successful. A pervasive myth running from the Reagan Years until now is that anyone in America can be rich so, you know, don't hate on the players.

Somehow, it became inserted into the national consciousness that the act of criticizing a rich person was akin to eating a bucket of communism and dressing up in socialist rags. Somehow, it became cool to accept the idea that the wealthy were actually deserving of their status, smarter than everyone else, and capable of guiding America to a shining new future. What we now know is that our elites are a tremendous failure, benefiting from nepotism and ignorance all at the same time.

The problem with our culture of inequality is that we don't understand the ramifications of not holding the wealthy accountable. They're ruining the country. They are confiscating vast amounts of wealth and pushing it into a pile that no one can touch. They're consuming the labor of others and they're not producing anything that resembles a societal benefit--witness the need for our government to beat the hell out of the Swiss for years just to get a hold of the untaxed holdings of America's elite.

It was no mean trick for the rich to convince us all that we could "join" them one day. It allowed millions of Americans to vote against their economic self-interest and to accept a super-wealthy class of Americans that would, ultimately, destroy the American middle class dream. Somewhere, a marketing idea took hold and it became impossible to hate the rich. Maybe it was TV or the movies, but we are desperate for something authentic right now. We are right on the edge of swinging back the other way, to a society that condemns greed and avarice.

Are we going to start to do something about inequality? Or will we be tricked into misunderstanding what it's all about? Don't look to the media to help.
on September 29, 2014