Down to the Wire in Scotland 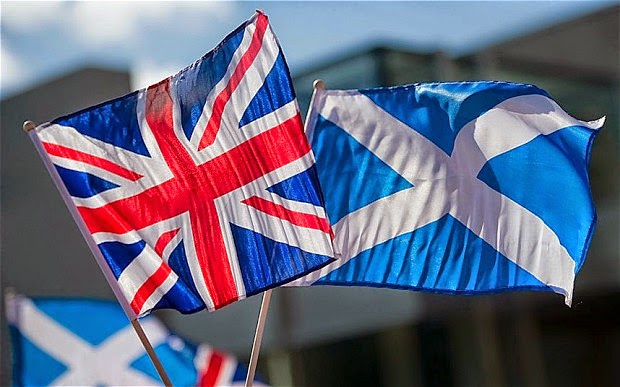 My guess is that the vote will be a "no" but it will be close enough to give Scottish independence a new life for decades to come. What is hurting Britain right now is not the thought of letting go of the Scots but the day to day reality of their own incompetent ruling class:

The leaders of the main UK parties have made a plea for a vote against Scottish independence, as they campaigned north of the border ahead of the referendum.

Prime Minister David Cameron said he would be "heartbroken" in the event of a "Yes" vote, while Labour leader Ed Miliband said the case for the Union came from the "head, heart and soul".

The poll, by Survation for the Daily Record, was conducted before the Westminster party leaders announced their campaign visits.

Mr Cameron and Mr Miliband abandoned their usual Prime Minister's Questions session in the House of Commons to head north, after other recent opinion polls suggested the referendum race was now neck and neck.

The English speaking people of Britain are risk and change averse; they'll take the status quo over everything else if it looks smart enough in a suit. Who even knew that the Scottish flag was the Saltire? And won't they have to remove it from the British flag?

This is the end result of believing that someone has value only if their father was born in the right way with the right amount of money and social prestige. Societies that still function this way are largely corrupt and look like Saudi Arabia or Manhattan.

Let Scotland go. It should have been it's own version of Ireland a hundred years ago.
on September 10, 2014