The Minnesota Vikings Are a Douchebag Franchise 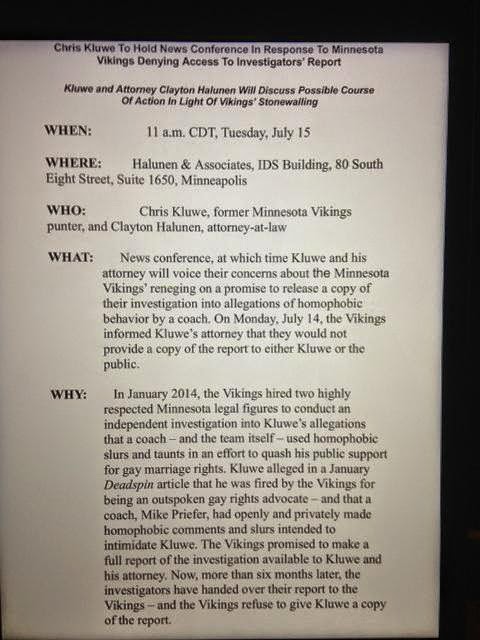 In case you've been wondering, yes. Chris Kluwe's release from the Minnesota Vikings was about his support for gay rights and for being outspoken about issues that made one of his fundamentalist Christian coaches uncomfortable.

It would appear that Kluwe has a case against this franchise for being bigoted and intolerant, one that may have legal ramifications that could lead to civil legislation. Otherwise, the report would have exonerated everyone and would have been released. Instead, someone decided to sit on it because, well, why hand over a surefire lawsuit and draw even more attention to the fact that your franchise is full of douchebags?

The NFL has an image problem and it cannot allow two things to continue: one, it can't allow the Vikings to bury Kluwe's complaints. It has to deal with them. And, two, it has to force the team that plays in Washington D.C. to change the franchise nickname. Until then, it's a hatefest and an intolerant league out of step with American society.
on July 15, 2014
Email ThisBlogThis!Share to TwitterShare to FacebookShare to Pinterest
Labels: Bigotry, Commentary, Dignity, Football, Ignorance, News, NFL, Sports, Twitter