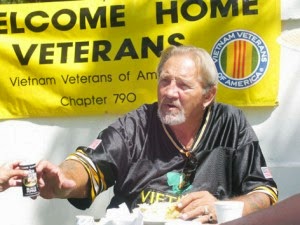 Did you hear? Someone shot up Myrtle, Minnesota:

Man cited for discharging gun
MYRTLE — Freeborn County Sheriff’s Office deputies cited Larry Prantner for reckless discharge of a firearm after receiving a report of gunshots fired at about 2 a.m. July 17 on First Avenue in Myrtle.

Pranter, shown above, was merely cited. Not arrested. Not jailed. Not charged with a felony. Not given a sobriety test.

No one shot him. No one brought in a fully militarized SWAT team to blow up his house and seize all of his weapons. No one even took the gun away from him that he was shooting at two in the morning, leaving him with whatever other guns he probably owns. No one beat his ass and dragged him to jail. He was not inconvenienced in any way until they had him sign the paper they gave him that indicated "your bad." They probably even called him sir.

For shooting his gun, repeatedly, in a municipal area in the town of Myrtle at two in the morning.