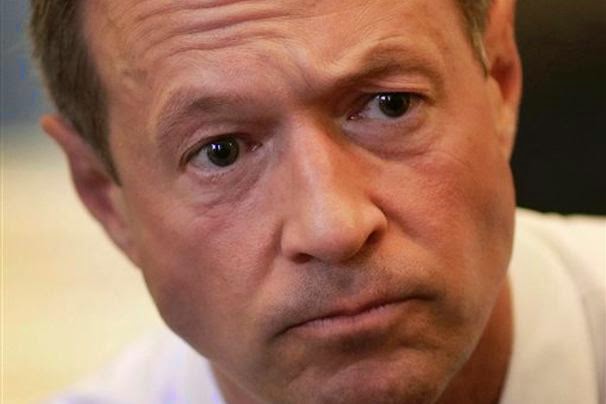 You would think that demonstrating compassion during a humanitarian crisis would be a no-brainer. You'd be wrong, because this is America and the specter of "illegal immigration" has made sensible people lose their minds:

After his strong criticism of the Obama administration's plans to return thousands of young undocumented migrants back to Central America, Maryland Gov. Martin O'Malley asked a top White House official that the children not be sent to a site that was under consideration in his home state, sources familiar with the conversation said Wednesday.

A potential Democratic presidential candidate in 2016, O'Malley surprised some in his party when he sharply criticized a White House proposal to give new legal authorities to the Department of Homeland Security to expedite the deportation of the unaccompanied minors and their families."He privately said 'please don't send these kids to Western Maryland,'" a Democratic source told CNN. The heated discussion between O'Malley and White House domestic policy adviser Cecilia Munoz occurred during a phone call late Friday evening, sources familiar with the conversation added.

I'm going to spell this out for people--when a bunch of children show up at your door, alone and afraid and abused and neglected, you take them in and you care for them. Individual people do not need to open up their houses (damned if a lot of people wouldn't, though) but our government certainly should have a humanitarian response to a humanitarian crisis like this. Our government has FEMA and a whole host of other entities that could be used to respond to the border crisis. We have the military, of course, and we have Federal control of the National Guard. Simply order the Texas National Guard to mobilize for operations, and be done with it.

I think it would be supremely intelligent to bring in every kid we can find and give them a home. We could raise them as our own--a generation of Latin American kids could be educated and housed and fed in this country for the price of a single oil company subsidy and we could teach them English and Spanish and give them a chance to go back home with what they have learned and do one of two things--either have a life or tear down the failed states that they came from and build them up anew.

At the end of the day, you take in these kids, you take care of them, and you find the best solution for them. You act like a Christian, in other words, and this will allow you to safely ignore the morons who think this is a Christian country (because most of them are opposed to the "illeagles," you know).

If these kids were Irish, we'd take them in a heart beat. If they were Cubans, we'd hide them in closets when it was time to send them home. We took in untold numbers of Vietnamese kids who came here by any means possible and we gave them a life. There are tens of thousands of refugees from Cold War conflicts that were brought to this country and given another chance--whole families were settled in enclaves all over America. Their integration into American society has not been stress free but it's a damned sight better than the killing field that waited for them back home.

So, I gotta ask--which brown people do we like and which ones are we going to turn our backs on? Who's a Christian now? Who believes in taking in Afghan interpreters and Hmong refugees and Cuban exiles and giving them a shot? Why does ideology have anything to do with it? Is this because we (gasp!) have a Negro in the White House and we can't do anything anymore forever until he's gone? What's different with these kids? Oh, that's right. They're no different than any other kids who come here, desperate for a chance. But they're "illegal immigrants" circa 2014 and the raving lunatics who worship God with one hand while stirring the frothy drink of insanity brewing in their two-cent heads have all of the power right now, apparently. They've taken a man like Martin O'Malley and turned him into a hypocrite and a loser. Must not have been much of a stretch on that one.

O'Malley should have stepped up and said, "send me 5,000 kids and we'll make this work." He should have said, "we will care for those who are in need and we will show them what America is all about."

Instead, he effectively ended any hope he might have had for being a decent leader.