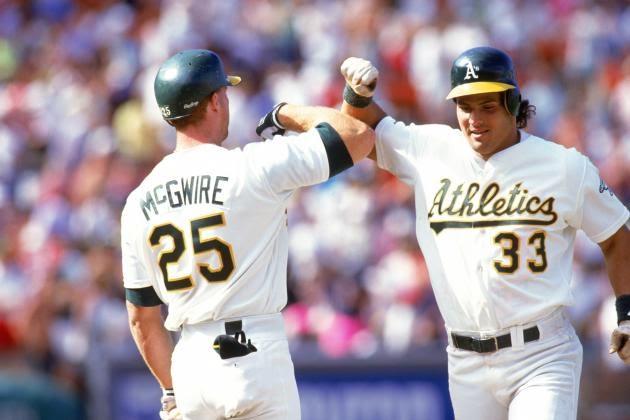 What you did was wrong, too:

The Bash Brothers' relationship has been smashed to pieces, and it doesn't look like it will be put back together again.

Mark McGwire and Jose Canseco formed one of the most deadly offensive duos in the late 1980s and early '90s, but Big Mac doesn't want to reminisce on the past, tellingESPNLosAngeles.com that he's unwilling to mend the relationship between him and Canseco.

"It's too late. I don't care to ever speak to him again," McGwire said, viaMark Saxon of ESPNLosAngeles.com. "What he did was wrong."

McGwire lives in a world where everyone but himself can be blamed for something he put in his body in order to cheat. He has to pay for that with the continued indifference of the baseball writers who won't give him a pass and put him in the Hall of Fame. Attitudes towards steroids have softened a bit lately, and I would say there's an slight chance he'll be chosen. Jose Canseco probably shouldn't wait for a call, however.
Meanwhile, Andy Pettitte and Rogers Clemens are still buds, so it's all good.
on July 24, 2014
Email ThisBlogThis!Share to TwitterShare to FacebookShare to Pinterest
Labels: Accountability, Baseball, Cheating, Commentary, Ethics, History, MLB, News, Sports, Statistics, Steroids