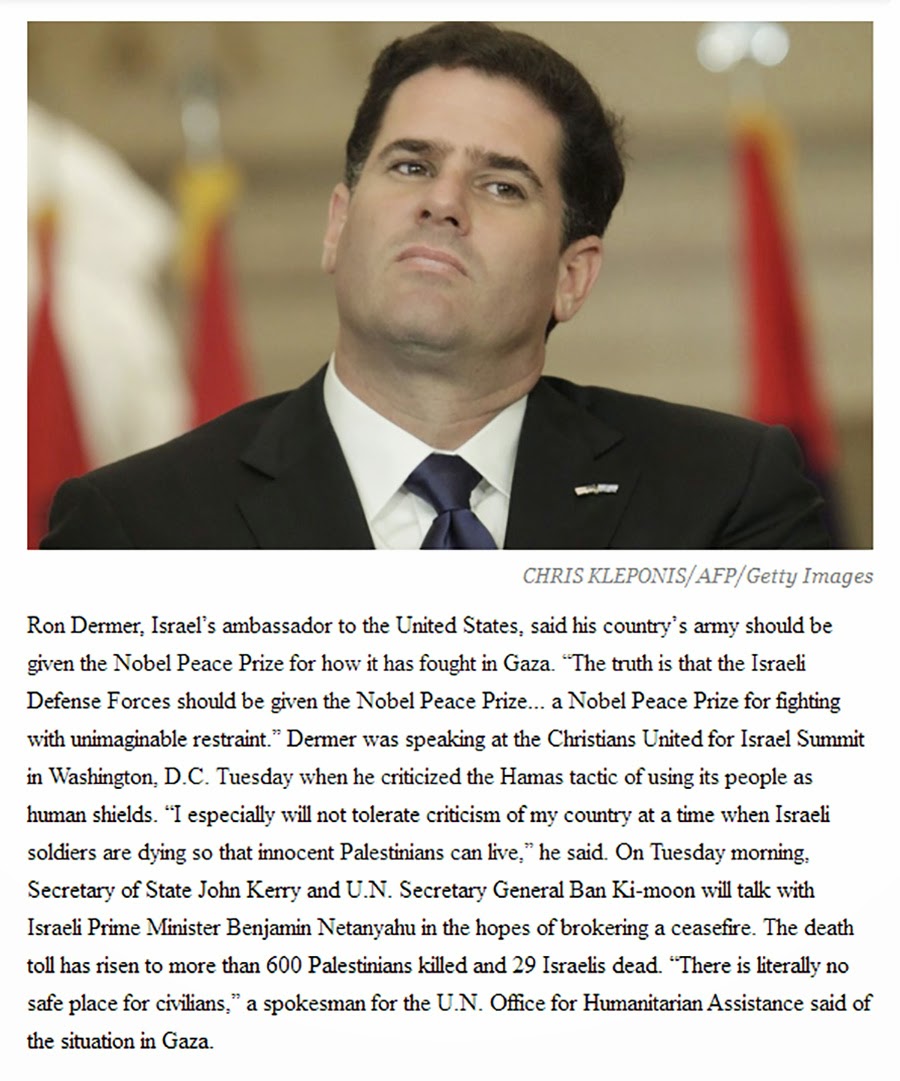 When I read things like this, I can't help but wonder how much fun Kurt Vonnegut would have had with the idea that troops invading someone else's territory should be given a peace prize and that they cannot be criticized for anything at all.

Here's what he thought of indiscriminately bombing and killing people:

Every day we walked into the city and dug into basements and shelters to get the corpses out, as a sanitary measure. When we went into them, a typical shelter, an ordinary basement usually, looked like a streetcar full of people who’d simultaneously had heart failure. Just people sitting there in their chairs, all dead. A fire storm is an amazing thing. It doesn’t occur in nature. It’s fed by the tornadoes that occur in the midst of it and there isn’t a damned thing to breathe. We brought the dead out. They were loaded on wagons and taken to parks, large open areas in the city which weren’t filled with rubble. The Germans got funeral pyres going, burning the bodies to keep them from stinking and from spreading disease. 130,000 corpses were hidden underground. It was a terribly elaborate Easter egg hunt. We went to work through cordons of German soldiers. Civilians didn’t get to see what we were up to. After a few days the city began to smell, and a new technique was invented. Necessity is the mother of invention. We would bust into the shelter, gather up valuables from people’s laps without attempting identification, and turn the valuables over to guards. Then soldiers would come with a flame thrower and stand in the door and cremate the people inside. Get the gold and jewelry out and then burn everybody inside.

Clearly, humanity has jumped the shark and we're left with the crumbs at a table that hasn't been pleasantly set for a long time. Humanity is starved for substance and truth in the age of instant communication and smart phones, and a symptom of the insanity that affects us all is when far too many people accept without questioning the kind of logic displayed above. War is always a horrible, horrible last result that rarely accomplishes anything other than killing people who no one would reasonably conclude should have been killed to begin with. We're clawing at the idea of being able to believe someone about something, but the sad fact is, the only thing that sells anymore are lies.

The fellow in the suit above is one hell of a salesman for lies. He has a counterpart in a similar suit somewhere, and I wonder how ridiculous that fellow is when he talks about killing for peace.
on July 22, 2014