John LaDue is Going to Get Away With It 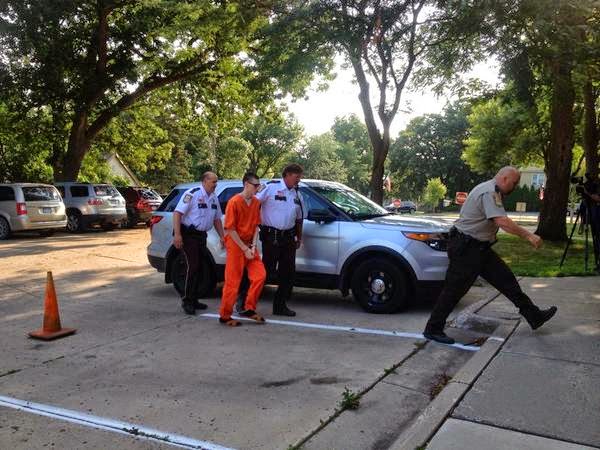 An accountability moment for young John LaDue of Waseca, Minnesota is not going to happen:

Minnesota prosecutors said Wednesday they will appeal a judge’s decision to toss out the most serious charges against a teenager accused of plotting to blow up his high school. A Waseca County judge dismissed four counts of attempted first-degree murder and two counts of attempted first-degree damage to property against 17-year-old John LaDue, arrested May 1 after a neighbor called 911 to report the teen’s bizarre behavior. Police say LaDue detailed in writing how he wanted to kill his family and then bomb Waseca Junior/Senior High School, murdering “as many students as he could.”

LaDue continues to face the lesser six charges of possession of explosive devices after prosecutors allege he had a storage locker of ammunition and bomb-making materials. In juvenile court Wednesday, he wore a navy suit with a dress shirt and only spoke to give his birth date. The judge decided to put on hold a decision whether to try LaDue as an adult until the appeals process is over.

This kid was ready to kill as many people as he could. We know this because he had an arsenal of bombs and guns and was stupid enough to actually write down what he intended to do--a sure sign of intent if there ever was one.

The Waseca County Prosecutor at the center of this inept performance is Brenda Miller, and she is the assistant Waseca County attorney who prosecuted former Albert Lea City Manager Jim Norman.

Norman, if you don't know already, was a newly-hired employee of the city and he used the credit card he was issued by the city to make purchases that were not authorized. Norman apologized and said that he made a mistake (never mind that he was told to use the card during the move of his belongings from one city to another). Norman was prosecuted by Miller in what I would call a zealous fashion.

If you follow the link, read towards the end of the article where she congratulates herself on figuring out that Norman did something he wasn't supposed to and that destroying his life was more important than using some sound judgment. That is, suspending her zealotry to accept the recommendation of the Albert Lea City Council to NOT prosecute Norman. Miller's judicial application of the law appears to have failed her because that same zealotry did not extend to prosecuting any of the other employees of the city of Albert Lea who used their city-issued credit cards to make unauthorized purchases.

So where was this zealotry in relation to going after John LaDue? Would it have taken a bombed-out school full of dead kids to get the staff up to speed on getting past the judge?

In any event, young Mr. LaDue is going to end up getting away with it and you can thank the crack team of legal professionals in Waseca County, Minnesota for that. Maybe they can find a jaywalking scalawag to go after in order to make up for what they have failed to do to protect the citizens of Waseca County.
on July 30, 2014