They Threw One of the Bums Out 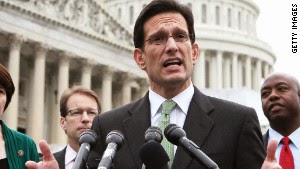 Eric Cantor may have been asked to leave Congress:

In what was described as a political "earthquake," the No. 2 Republican in the House, Eric Cantor, lost his primary on Tuesday to a college professor and political neophyte.

Cantor conceded the race with 97% of precincts reporting from the Richmond-area district, Cantor trailed Dave Brat 56% to 44%, according to the Virginia Secretary of State's website. Turnout was low.

"Obviously we came up short," Cantor said in his concession speech.

The Tea Party still exists? And this can happen? Oh, my.

A pampered elite just saw the world flash before their eyes. If you were to throw forty or fifty incumbents out of Congress, no matter their party affiliation, it would be a fantastic start. The problem is, the people being thrown out of Congress are being replaced by crazies who have a single issue.

In any event, holy crap. The plebes have spoken.

Cantor could still run, of course, because Joe Lieberman and all that, but the mechanisms that will kick in will be swiftly orchestrated by his number one enemy, Speaker of the House John Boehner, who is probably still hollering his pleasures out the window.
on June 10, 2014