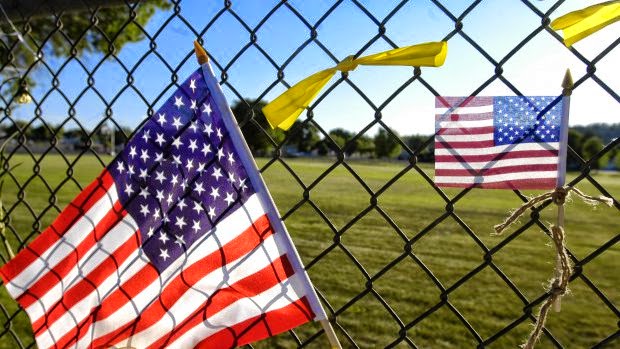 Come on. Not another sad old Vet who loves the flag and lives near rich people who hate America:

A veteran could lose his home because of a small American flag he has placed in a flower pot in front of his home.

Larry Murphree explained that his homeowners’ association in the Sweetwater community wants him to remove the flag because it violates home display rules. Furthermore, he is facing $8,000 in fines if he doesn’t take it out of his flower pot.
“I want it to go away. It’s such a minor little thing and they keep coming after me,” Murphree told WAWS. “They just sent me a letter that says I owe them around $8,000 and they put a foreclosure lien on my house.”

Murphree has 30 days to pay the fines and remove the flag or the homeowners’ association will move forward with the foreclosure.

I hate these stories. Buried in there somewhere is usually a telling detail. As in, the dude is a shirtless crank with no money who is mad because they won't let him keep a car with three flat tires in his yard so he put out an American flag just to be difficult.
First of all, Mr. Murphree is being stupid on purpose. When you move into a house in Florida, you are going to encounter the mentality that surrounds exclusionary communities (otherwise known as compounds of scared, semi-wealthy people who fear the hordes outside the gate). They initiate "home display rules" because they don't want anything looking cheap, fake, or stupid to drive the value of their property down in any way, shape or form. When someone sticks the American flag in front of their house, and when they allow it to become tattered and torn and when they display it improperly (like not illuminating it at night), they make the place look run down. Sensible people know that there's nothing wrong with the American flag but there is something wrong with flying it in front of your house in lieu of fixing the siding or keeping the yard looking neat. It drives down property values to have flags and other symbols out in front because it tells the people who come into the neighborhood that there's a VETERAN somewhere around there. And everyone knows that a VETERAN is going to come apart at the seams and start shooting, man, especially if the heroin runs out and a guy named Zeke comes over on a motorcycle to cook meth so you can both buy an electric Harley with a sidecar because your back gives out when you have to put your feet down while riding because your're flipping old.
Second, the fines are a binding aspect of living where there is a homeowner's association so allowing them to climb into the thousands of dollars is immature and foolish. Don't like the rules? Move out. Good luck finding a decent place to live where they want you to fly the flag because then you're going to be all contrary and difficult and assert your free right NOT to fly no damned flag except the Gadsden Flag, which means, when upside down, that Obama is a tyrant and your nephew can't get his pills anymore from the free clinic or something. When you buy a home, you sign a blizzard of papers. Inside of that blizzard is an agreement to accept the rules of a homeowner's association. Good luck fighting that. Just because everyone around you hates flags, symbols, and the cheapening effects of things like a Florida Marlins World Series Victory Banner doesn't mean you can't sit in the privacy of your own home and hum the Battle Hymn of the Republic while watching Bruce Willis movies.
Third, your pride in America does not come from sticking a cheap piece of plastic in a flower pot. It comes from knowing that these phony stories trade on misplaced outrage. Grow up, abide by the rules of your homeowner's association, pay your fines, and stop using cheap local media outlets to draw attention to the fact that you're pathetic and make bad choices. The reporters who write these stories are lazy and can't think of anything to do so they love it when a cantankerous old coot pretends that his dishonorable discharge for going AWOL six times in 1974 when he was stationed in Kansas means he's now a retired Special Forces sniper colonel snake eater bomb expert airborne assassin and HAS TO BE LISTENED TO despite the fact that he marches around with his gut out and can't find his DD 214.
Do you love America? Then love America and stop pretending that it has anything to do with a flag.
on June 27, 2014