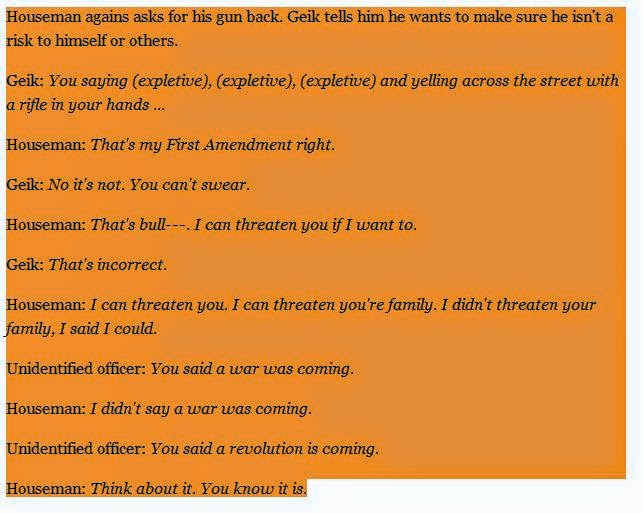 What you see above is the partial transcript of a confrontation between local law enforcement and a belligerent open carry advocate on a city street in Kalamazoo, Michigan.

The statement "I can threaten you if I want to" is central to the fallacy of gun advocates and open carry fanatics--no, you cannot threaten people. You cannot issue terroristic threats and threaten to shoot people. You simply cannot engage in this behavior.

Now, if you want to march around with your rifle on a sling--and this story goes on to say that the poor old man with the unloaded carbine who decided to engage in a game of suicide by cop (without succeeding) did express a wish for a sling for his weapon. It's a sad day in America when a man can't get his life together and find four feet of canvas belt, but still.

This story centers around two things though. One, there are a lot of people who do not have their shit together. This man's life has a high degree of quality in it if his idea of fun is to walk around with a rifle in public and scare people. That's entirely outside of the realm of responsible gun ownership and enters a zone that warrants examination. How messed up are you if that's your life? What chemical dependency issues inspire such a thing? You're not in a good place when you're threatening the family of a police officer and stumbling around, bumping into things while other people call 911 because you can't find a sling for your weapon.

Two, the police aren't there to die for your rights. How it came to be that they didn't just shoot this man after his first threat is a testament to how cautious they were and how professional they were in terms of handing the situation. They were well within their rights to deliver a beating or worse when the man failed to follow their public safety commands. And yet, because the laws are so messed up, they knew that they had to hold back and do nothing because of the lunacy of open carry laws.

When you say to a cop, "I can threaten you if I want to," you're asking for the successful conclusion of a suicide by cop scenario. We are not done with this insanity. We have not seen the end of this kind of advocacy. Someone somewhere got it into their head that they could shoot cops and walk away unscathed and it didn't come from Obamacare or anything like that.
on June 16, 2014