Finally, We Hear From Dick Cheney 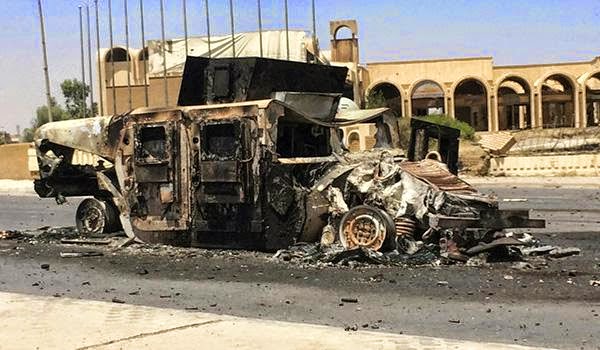 Dick Cheney and his daughter have teamed up to attack the President of the United States of America on a foreign policy issue:

As the terrorists of the Islamic State of Iraq and Syria (ISIS) threaten Baghdad, thousands of slaughtered Iraqis in their wake, it is worth recalling a few of President Obama's past statements about ISIS and al Qaeda. "If a J.V. team puts on Lakers' uniforms that doesn't make them Kobe Bryant" (January 2014). "[C]ore al Qaeda is on its heels, has been decimated" (August 2013). "So, let there be no doubt: The tide of war is receding" (September 2011).

Rarely has a U.S. president been so wrong about so much at the expense of so many. Too many times to count, Mr. Obama has told us he is "ending" the wars in Iraq and Afghanistan—as though wishing made it so. His rhetoric has now come crashing into reality. Watching the black-clad ISIS jihadists take territory once secured by American blood is final proof, if any were needed, that America's enemies are not "decimated." They are emboldened and on the march.

Never mind that the "black-clad ISIS jihadists" exist solely because, after invading Iraq, the United States made the decision to purge Iraq of the Ba'ath party, disband the army and all civil services, and create a massive political and logistical disaster. Never mind that Cheney, et al, then spent years doubling down on the whole thing, killing thousands of Americans in a witless neoconservative bungling that serves as the single greatest strategic foreign policy blunder in generations. Never mind that there is absolutely no justice in a world where the media takes this man seriously about anything related to foreign policy.
No, have a look:

In one of his final acts in office, President Bush in December of 2008 had signed a Status of Forces Agreement (SOFA) with the Iraqi government that set the clock ticking on ending the war he’d launched in March of 2003. The SOFA provided a legal basis for the presence of U.S. forces in Iraq after the United Nations Security Council mandate for the occupation mission expired at the end of 2008. But it required that all U.S. forces be gone from Iraq by January 1, 2012, unless the Iraqi government was willing to negotiate a new agreement that would extend their mandate. And as Middle East historian Juan Cole has noted, “Bush had to sign what the [Iraqi] parliament gave him or face the prospect that U.S. troops would have to leave by 31 December, 2008, something that would have been interpreted as a defeat… Bush and his generals clearly expected, however, that over time Washington would be able to wriggle out of the treaty and would find a way to keep a division or so in Iraq past that deadline.”

But ending the U.S. troop presence in Iraq was an overwhelmingly popular demand among Iraqis, and Prime Minister Nuri al-Maliki appears to have been unwilling to take the political risk of extending it. While he was inclined to see a small number of American soldiers stay behind to continue mentoring Iraqi forces, the likes of Shi’ite cleric Moqtada al-Sadr, on whose support Maliki’s ruling coalition depends, were having none of it. Even the Obama Administration’s plan to keep some 3,000 trainers behind failed because the Iraqis were unwilling to grant them the legal immunity from local prosecution that is common to SOF agreements in most countries where U.S. forces are based.

So, while U.S. commanders would have liked to have kept a division or more behind in Iraq to face any contingencies — and, increasingly, Administration figures had begun citing the challenge of Iran, next door — it was Iraqi democracy that put the kibosh on that goal. The Bush Administration had agreed in 2004 to restore Iraqi sovereignty, and in 2005 put the country’s elected government in charge of shaping its destiny. But President Bush hadn’t anticipated that Iraqi democracy would see pro-U.S. parties sidelined and would, instead, consistently return governments closer to Tehran than they are to Washington. Contra expectations, a democratic Iraq has turned out to be at odds with much of U.S. regional strategy — first and foremost its campaign to isolate Iran.