Dr. Oz is Just Another Grifter 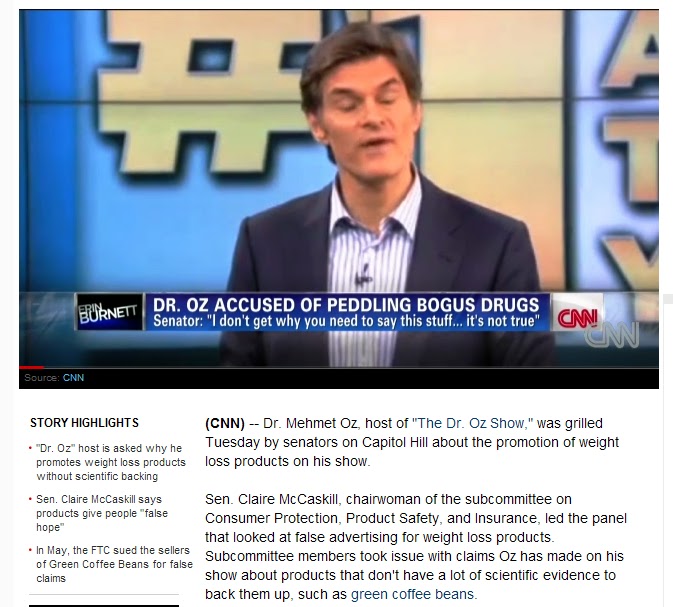 Dr. Mehmet Oz, host of "The Dr. Oz Show," was grilled Tuesday by senators on Capitol Hill about the promotion of weight loss products on his show.

Sen. Claire McCaskill, chairwoman of the subcommittee on Consumer Protection, Product Safety, and Insurance, led the panel that looked at false advertising for weight loss products. Subcommittee members took issue with claims Oz has made on his show about products that don't have a lot of scientific evidence to back them up, such as green coffee beans.

"The scientific community is almost monolithic against you in terms of the efficacy of the three products you called 'miracles,'" saidMcCaskill, a Missouri Democrat. She said she was discouraged by the "false hope" his rhetoric gives viewers and questioned his role,"intentional or not, in perpetuating these scams."

The Subcommittee on Consumer Protection could meet every day for the next year and still not put a dent in the widespread fraud and abuse committed against American consumers. Dr. Oz is a telegenic reminder that the practice of fleecing people and using their hopes and fears to separate them from cash money is alive and well in the modern age. He is using the elusive promise of a miracle drug to make people skinny--something that should have been outlawed outright as a marketing practice decades ago--to steal money from desperate people.

What kind of theft will send you to jail? Dr. Oz is rich because he has a platform with which he can lie to people. Who gave him that platform and how do we sue the worthless hacks who empowered him to be the face of weight loss grifters everywhere?

Put them in jail and take away the money they made selling useless products to consumers. That would be a great start.
on June 18, 2014